Hot holiday July is already behind us, it would seem that the cryptocurrency market will take a break even for a moment. Nothing could be further from the truth –it is bursting with important information. How Bitcoin and altcoins do this month? You’ll find out in this rank. Give it a look.

In the middle of the month, Bitcoin’s price has warmed up the connection of all crypto stock exchanges to red, reaching a peak of 8,487 USD. The beginning of the rallies started very impulsively when the price went up by 11%, making all altcoins significantly behind. The BTC dominance index reached its highest level in 2018, recording an increase to 48.53%. Previously, such a significant advantage of digital gold was visible in December 2017, when Bitcoin was at the top.

One of the factors that influenced Bitcoin dominance is the wait for the decision of the US Securities and Exchange Commission (SEC) regarding ETFs. Of the three proposals for the creation of funds lying on the SEC table, one (belonging to the brothers Winklevoss) was rejected. The remaining proposals are waiting for their resolution by September. Another factor that could trigger an upturn was the information that the world’s largest investment company BlackRock is looking at cryptocurrencies. This news circulated around the world media, igniting investors’ imaginations – a corporation managing capital of over 6 billion USD  enters the cryptocurrency market.

In the first month of summer holidays, a lot of information has appeared around the world influencing the regulation of cryptocurrencies and those that gradually contribute to their adoption.

In July, a meeting of finance ministers from the 20 largest economies of the world took place, during which they discussed, among other things, cryptocurrencies. A report was made from the meeting stating that „technological innovations – including those hidden behind cryptocurrencies – can bring significant benefits to the financial system and the world economy”. We also learned that the G20 group would establish an AML policy for cryptocurrencies by the end of October. The G20 member countries are currently analyzing global standards against money laundering (AML) using cryptocurrencies. Member countries have also established a Special Group on Counteracting Money Laundering (FATF) – an intergovernmental body set up to combat money laundering and terrorist financing.

Two hearings about cryptocurrencies took place in the US Congress. It was conducted by the House of Representatives Committee on Financial Services to discuss the general topic of cryptocurrencies, the hearing referred to the „crypto” issue as a new form of money. Members analyzed „the extent to which the US government should consider cryptocurrencies as money and their potential national and global use”.

On the same day, the Agriculture Committee of the House of Representatives held a hearing on „Cryptocurrencies: supervision over new assets in the digital era”. In a statement, chairman Michael Conaway explained that the hearing aims to „shed light on the promise of digital assets and the regulatory challenges facing this new asset class”. This is a remarkable statement that states that at least some in US state law are of the opinion that cryptocurrencies constitute a new type of asset.

The South Korean government belonging to the G20 group began to develop industry classifications focused on blockchain technology and cryptocurrency. The project aims to create the basis for creating policies that regulate blockchain technology, and the new structure divides the industry into three main categories and 10 subcategories. The attitude of the state from the Korean Peninsula is one of the most active in this area in the world. Korea is not the only country that made favorable moves towards regulating cryptocurrencies in the previous month. The Maltese Parliament has passed three laws providing a complete legal framework for business related to cryptocurrencies and distributed digital registers (DLT). „Three laws regulating DLT technology were approved by the parliament and implemented. Malta is the first global jurisdiction ensuring legal stability in this area ”

Departing from the great policy, it is worth looking at what the largest stock exchanges announced in July.

Coinbase, the largest cryptocurrency market in the US, begins to offer custody services. Institutional product Coinbase began taking deposits, from institutional hedge funds and other clients who can deposit at least $ 10 million. What’s more, the stock exchange is planning to add five additional digital currencies to its platform. The team said they plan to supplement the cryptocurrency list with Cardano (ADA), Basic Attention Token (BAT), Stellar (XLM), Zcash (ZEC), and 0x (ZRX). In addition to expanding its currency offer, the American stock market has decided to influence the adoption process of digital currencies, enabling the purchase of goods and retail services using cryptocurrencies. Payments with cryptocurrencies will be possible thanks to WeGift gift cards. Based on the information on the WeGift website, gift cards can be used in over 120 companies, including Tesco, M & S, Uber, Carrefour, Google Play and Costa. This service is currently only available in the United Kingdom, France, Spain, the Netherlands and Italy.

From the very beginning, the cryptocurrency industry faces the world of traditional finances.

Banks, as everyone knows, are not favorable to the digital revolution. In response to this situation, the stock exchange Binance has invested in Founders Bank, which intends to offer banking services tailored to the needs of companies dealing in blockchain technology and cryptocurrencies.

The services offered will include bank accounts and credit cards. Users will be able to access their accounts via mobile applications. The company claims that the estimated start of operations will take place in 2019. Bold actions of the largest cryptocurrency market have their justification in numbers. President of  Binance expects that in 2018 net profit will range from 500 million to 1 billion dollars. The first half of revenues amounted to approximately 300 million USD.

Binance is not the only organization that has decided to answer the problems of investors and cryptocurrency enthusiasts with banks. Litecoin Foundation, a non-profit organization serving the popular Litecoin cryptocurrency, acquired almost a 10% stake in the German bank WEG Bank. Ultimately, companies related to crypto space are to take over 90% of shares in the bank.

Traditional banks have already noticed some time ago that they are technologically starting to get away from cryptocurrencies.

Want to face the competition, they begin to research the blockchain and test it in practice. A group of European banks have announced that they have completed a series of cross-border financial transactions through a jointly developed blockchain platform. Live transactions on We.Trade have been made over the last five days between 10 companies and have been supported by four partner banks. HSBC, one of ten committed institutions, claims that three of its clients took part in the platform test. Built on the IBM Blockchain platform, We.Trade was founded by Deutsche Bank, HSBC, KBC, Natixis, Nordea, Rabobank, Santander, Société Générale and UniCredit to increase the efficiency of cross-border financial transactions.

Holidays are a great time to influence the adoption of cryptocurrencies.

In July, we received information that 85% of Canadians know what Bitcoin is, and the number of Canadians owning Bitcoin almost doubled in a year. No wonder then that Cryptocurrencies are increasingly appreciated by software developers and web browsers. Opera, a free web browser, created and developed by the Norwegian company Opera Software ASA, has created its own crypto wallet for platform users. The Opera team announced on July 11, that the portfolio application for Android will be added. Thanks to this, the browser becomes the first provider that provides a cryptocurrency portfolio embedded in its browser.

There is no month in which we would not hear about hacker attacks in the cryptocurrency space – in July did not stand out.

This time the victim of the attack was Bancor’s cryptocurrency exchange. As a result of a hacker attack, funds of about $ 23.5 million have disappeared. The attack took place on July 9 at 00:00. Stolen funds were nominated mainly in the Ethereum. Nate Hindman, head of Bancor’s communications department, said that while the team was able to block the transfer of about 2.5 million BNT tokens – worth an additional $ 10 million, it was not able to do so with 25,000 ETHs – worth about 12.5 million USD and 230 million NPXS tokens (totaling about 1 million USD).

Binance suspended the exchange services after seeing suspicious transactions on Syscoin. It reacted instantly to the incident and launched a special SAFU fund, which aims to protect the interests of users and protection in extreme cases. The exchange will allocate 10% of all transaction fees to its creation.

In China everything happens on a big scale – hacking attacks also. Cryptocurrency malware has infected over a million computers, earning over $ 2 million in earnings to its creators over the past two years. According to a local press report, on Monday, the police in the Chinese city of Da Lian arrested 20 suspects from a computer company that allegedly took control of a large number of computers to gain illegal digging of cryptocurrencies.

What happened in crypto projects in July?

The VeChain project announced that it revised its development plan in response to community concerns related to its replacement of the token and launched the main network. However, this technology is not yet available and will only be active after VeChain has passed from the Ethereum network.

For the owners and observers of the Augur project I have good news. A fully functional project platform has been launched. The decentralized platform for betting on real-world predictions was one of the first applications created on the Ethereum blockchain, and its creators sold tokens for over $ 5 million in 2015.

July brought a slight revival on the quotations of some virtual currencies. Particularly noticeable increases could be seen on Bitcoin, the value of which increased by almost 21% throughout the month. This fact meant that the capitalization of the entire market for a moment again exceeded 300 billion USD.

Considering, however, that the appreciation of mainly digital gold was appreciated, the dominance of BTC throughout the market has increased significantly. At the moment it is again over 48% which is the best result since December 2017.

Looking at the most popular of the virtual currencies, we notice that as a result of the July increases, the rate crossed the line of the downward trend from the second half of January, which could be considered as the first, potential signal of change in market sentiment. Although for a few days the market was also above the technical resistance in the area of 7,800 USD, it is possible that in the near future a re-test of the already mentioned trend line will take place or even around 6,900 USD.

During the month, the capitalization of the entire cryptocurrency market increased from around $ 256.5 billion to just under $ 277.5 billion at the time of writing this article. At the maximum point, it was almost $ 304 billion. Bitcoin’s dominance also rose to 48.1% today. The top 10 cryptos in the ranking in terms of capitalization have been declining in the last 24 hours. Podium is occupied by Bitcoin, Ethereum and Ripple. 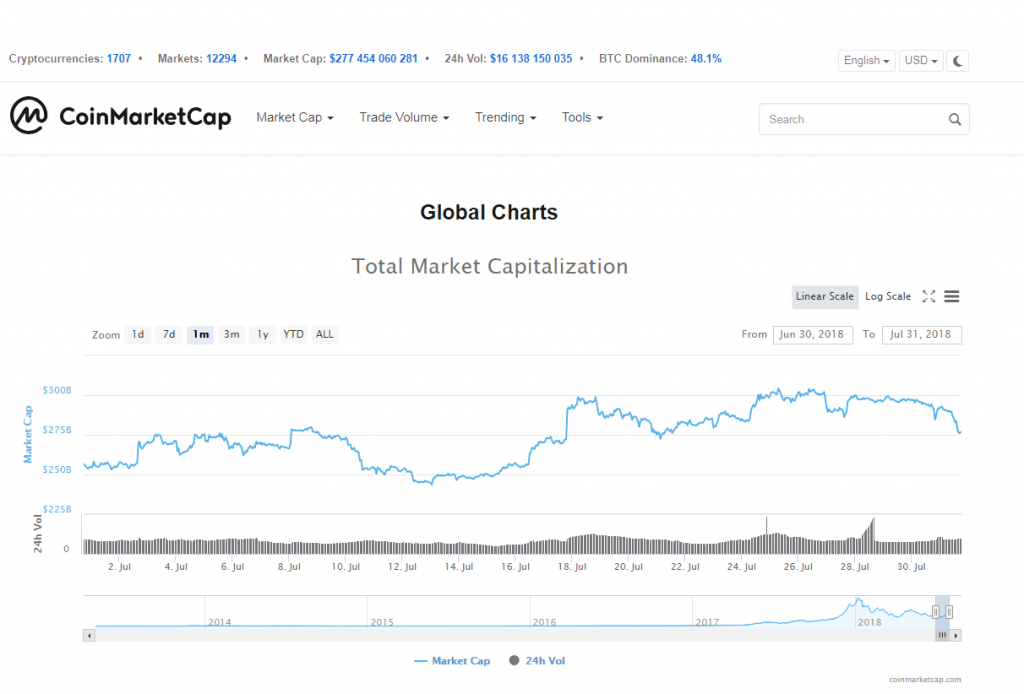 For BTC, the past month was the month when the control over the course was taken over by bulls. The price of $ 6,300 from the beginning of the month grew to $ 7,770 at present. Breaking down the downward trend line resulted in a final break of $ 7,900. However, the price has returned below this level again today. 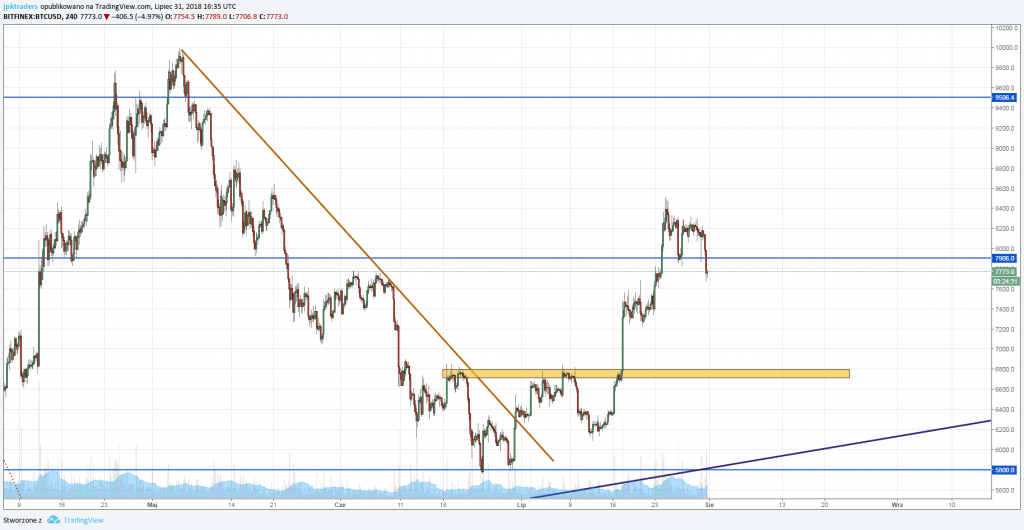 The situation with Ethereum and Ripple looks completely different. These cryptocurrencies move throughout the month in consolidation. ETH beated the downward trend line, but the buyers did not manage to break through the $ 486 resistance. It was tested many times this month. As a result, the sellers won by directing the price to support around $ 430. 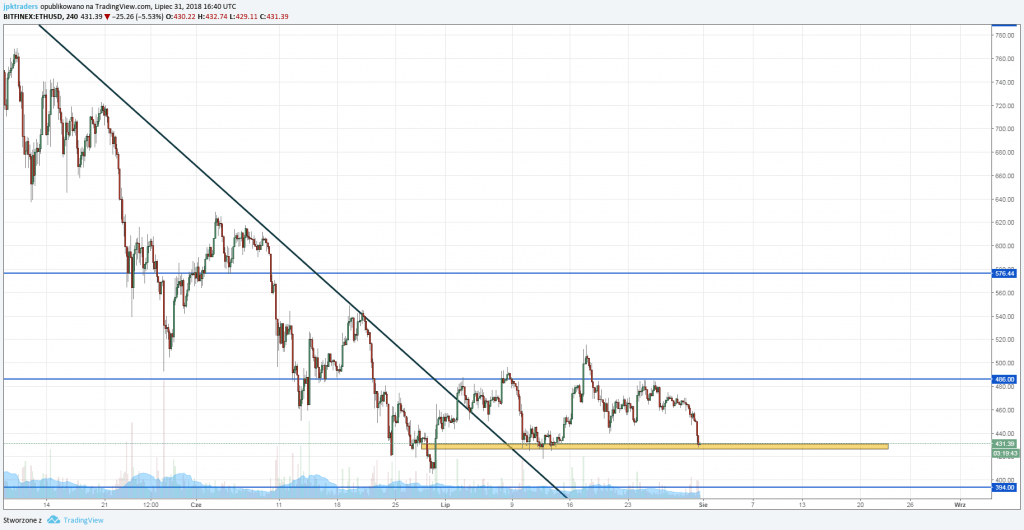 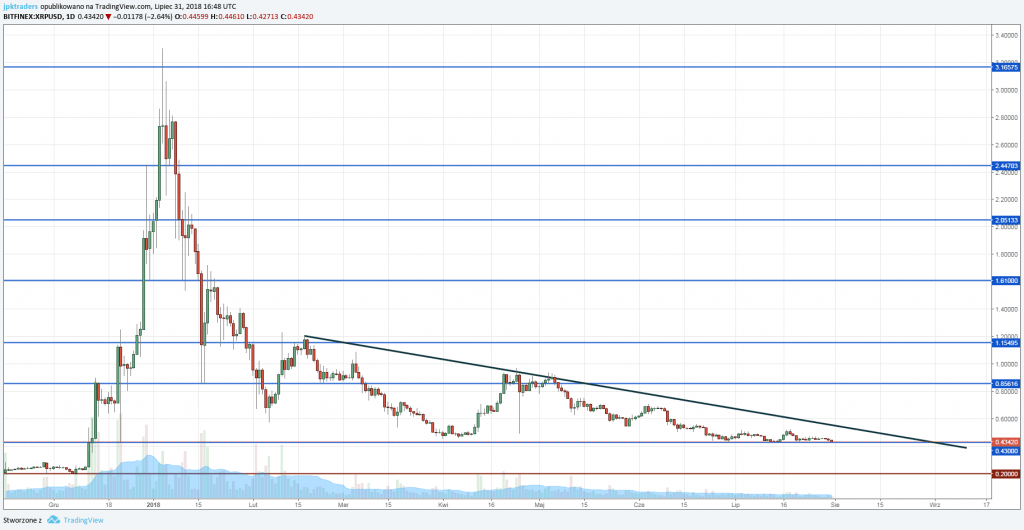