The last month of the year is behind us – we greeted with great pleasure the year 2018. Yearly rank of cryptocurrencies will be available tomorrow, so we invite you to visit us. Meanwhile, we present the December summary along with expert comments. Which coin gave the highest return rate? What sorts of forks have we experienced this month? What is the situation on the altcoin market? You will find the answers in our ranking.

It will not be surprising that the first place belongs to the Ripple. This quite controversial currency gave a return rate of 827%, which is a very high result – also bearing in mind the winners of previous rankings. The second place belongs to Siacoin with a score of 463%. Podium is closed by Stellar with the result of 404%. It is worth noticing that in the top of the December there were more coins from the so-called second and even third league. Coins such as Bitcoin, Dash, Ethereum, Zcash or Monero were basically at the end of the comparison with scores below 100%. The only cryptocurrency from our list, which recorded a literally symbolic drop is Ethereum Classic.

December was therefore a month of increases, although not necessarily Bitcoin. This one, however, established new ATH at the level of nearly 20,000 USD, but soon after, its price fell by half. Uncertainty appeared on the market, and the well-known question came back like a mantra: „Has the bubble already popped?”. The phenomenon, which a few years ago caused a trauma and fear among investors today seems to be eagerly awaited. It’s hard to say whether it is „already” – it is worth monitoring the situation more thoroughly than usual, because the declines were quite serious. At the same time, they were an occasion for the increase of less known coins. When the price of Bitcoin falls, investors most often resort to FIAT money (dollar, euro, etc.), but some choose other altcoins. The size of these rather niche coins at Binance – one of the largest stock exchanges in the world – tempted investors. The cryptocurrency market is still considered to be shallow, and second- or third-league coins are characterized by even lower liquidity. There are even voices that Binance’s introduction of such pairs is a deliberate act, but these are still speculations.

The capitalization of the entire market in the last month has doubled from nearly $ 300 billion to almost $ 650 billion at the highest point. After the fall of Bitcoin’s price before Christmas, the market collapsed and capitalization fell to $ 420 billion, but today it is over $ 630 billion. This is a remarkable fact, in the light of the fact that Bitcoin did not recover even half of the losses. Capital, this time, goes to the altcoins. The winner of the ranking currently occupies the second position in terms of capitalization ($ 91 billion), the third is Ethereum ($ 84 billion), and the fourth Bitcoin Cash ($ 42 billion). The fifth place is taken by the new cryptocurrency Cardano, unlisted in our ranking, with a result of $ 20 billion (we try to update the most important coins on the market – if you think it’s worth adding Cardano please send us a comment or an email).

The changes also affected Bitcoin’s dominance coefficient, that is its share in the overall capitalization of the entire market. The current level of 36% is the lowest in history, but the difference between the second crypto-currency in this matter is not the smallest in history. Currently it is over 20 percentage points, while during holidays, Bitcoin and Ethereum were divided only by 8 percentage points. Once again, you can see the inflow of capital to less popular coins.

Most important events in December:

For Bithub.pl Dominik Gordel, our analyst Picasso and JPK Traders comment on December

There were a lot of emotions in December, both on the bitcoin market and among altcoins. 19,891 USD – this is exactly how much bitcoin cost in the middle of the last month of 2017 on one of the leading cryptocurrency exchanges, and soon after that it returned to the price of nearly 10,000 USD. The first half of the month was definitely BTC, which, thanks to its increases, dominated the entire market and most investors’ attention was directed towards it.

However, its sell-off in the second half of the month became the driving force for the crazy increases of altcoins, reaching in some cases even several thousand percent. Altcoins dominated over the last few weeks have returned to the bull market, increasing their total market share to over 60%. Ripple was particularly surprising, reaching close to 100 billion USD of capitalization at the height of the moment, he became the second cryptocurrency in terms of capitalization, pushing Ether to third place in this ranking. Smaller cryptocurrencies also grew in size.

Noteworthy is the activity of John McAfee here. A well-known cyber security expert has increased his activities in the field of cryptocurrencies. By publishing the series „coin of the day” and „coin of the week” he contributed to the rapid increase in the cryptocurrencies he chose. Many people accuse John of manipulating the market, using his position as a profit in these currencies, but it should be noted how the impact on the valuation of a given asset can have a few-words entry of one person on a given topic. Dozens or even hundreds of increases after one entry in social media are a unique phenomenon on a global scale.

December was an extremely exciting month for people involved in cryptocurrencies. Although there were no negative news from Asia or some European countries, there was a lot of new capital on the market looking at the almost 100% increase in the capitalization of the entire crypto market. You can also see a sharp increase in the number of registrations on cryptocurrency exchanges causing overload on many sites and an increase in transaction fees on bitcoins – which cause that bitcoin is slowly becoming an expensive asset in the transfer.

Although the popularization of cryptocurrencies definitely improves their positions, however, when looking at, for example, the number of unconfirmed transactions or suggested transaction fees, it is clear what problems the currency initiated by Satoshi Nakamoto will come into contact with when the market becomes popular even more. Hopefully, despite the political games around Bitcoin, a consensus will be established to allow Bitcoin to continue its smooth operation on the network and to solve the problem of transaction fees and the long waiting time to confirm the transaction.

December on the cryptocurrency market was extremely exciting. The first half was dominated by the dynamic increases in Bitcoin’s value. Recall that on December 1, BTC was valued at around 9,900 USD and two weeks later it was almost 19,700 USD. This means that in two weeks the BTC value has increased by as much as in the last 9 years. This was also reflected in the capitalization, which at an extreme moment amounted to  335 USD billion. At that time Bitcoin accounted for over 67% share in the entire digital currency market.

These increases were caused, inter alia by introduction of BTC futures contracts. I have already written about what BTC contracts are and how they can influence the future valuation of digital gold in one of my earlier articles – Kontrakty Futures na Bitcoina – o co chodzi?

The second half of December was not so colorful and I do not mean only the BTC valuation but also valuation of many other altcoins. Because of the New Year trip, I am preparing this summary on Saturday, 30 December 2017. At the moment of writing this comment Bitcoin is valued at 12,500 USD, which means that sellers once again try to overcome support in the area of 13 thousand USD which is also the neckline of the head and shoulders formation which heralds declines.

One of the biggest stars of December was Ripple. At a time when Bitcoin and many altcoins were losing value, XRP seemed to be unmoved by establishing a new ATH regularly. Although at the beginning of the month Ripple was only valued at 0.25 USD, in the past Saturday the rate exceeded 2.47 USD. This means that people who have invested in this cryptocurrency at the beginning of December could enjoy a profit of over 950%.

Such strong appreciation meant that Ripple, which until recently was fourth in terms of capitalization, suddenly became the second largest digital currency in the world. The screen below shows that currently it is responsible for over 15.5% of the entire digital currency market. The BTC dominance, however, dropped to 38%. So will Ripple soon threaten BTC and replace its position as a leader?

December was undoubtedly a very exciting month when it comes to the cryptocurrency market. The market capitalization of cryptocurrencies grew during the month from 297 billion USD to almost 562 billion USD at the time of writing this article, and its maximum value this month reached almost 650 billion USD. 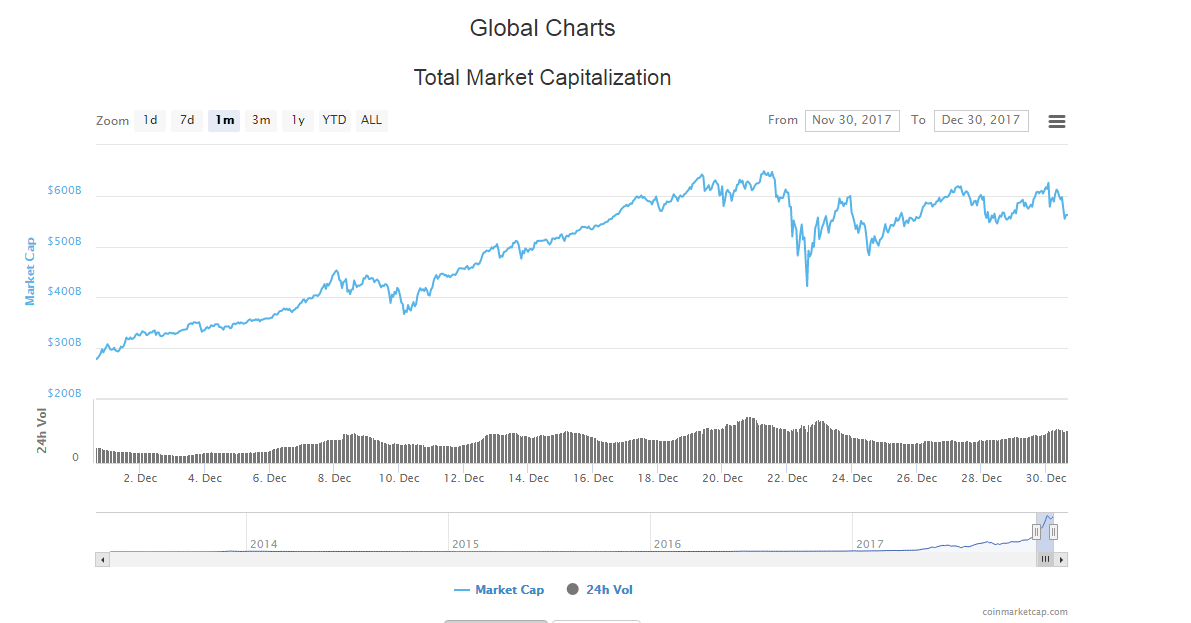 The top ten in the cryptocurrency ranking looks different than a month ago. Ethereum from the 2nd place dropped to place 3, giving chance to a Ripple, which was promoted by two places during the month. His exchange rate has increased over 30% over the past 24 hours. 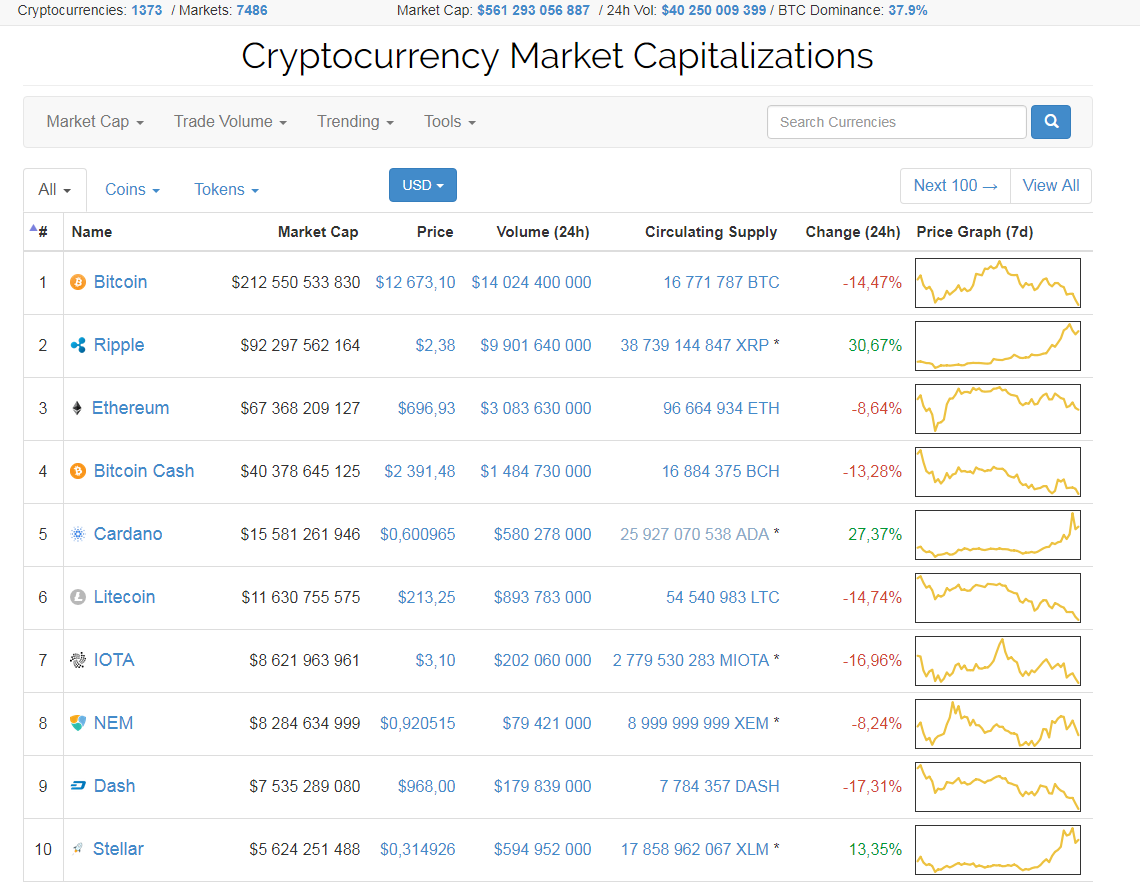 The BTC price, after crossing the magical November barrier at USD 10,000, doubled its value within 17 days. The markets reacted after the USD 10,000 breakdown of the snowball effect, triggering a massive consumer interest in buying and trading virtual currency. In the meantime, the Chicago Exchange Board Options Exchange (CBOE) has launched Bitcoin futures contracts. Despite the problems with the CBOE website, launching such a large product that attracts a huge number of interested people was relatively easy.

In comparison to the expectations of the majority, Bitcoin’s price has become a decisive impulse for futures transactions on the regulated market and futures contracts on Wall Street, as well as the implementation of the Lightning network. CBOE introduced futures on December 10, and CME began trading futures on  December 18. The Bitcoin price grew to 20,000 USD just after trading futures contracts in Bitcoin by CME Group.

This month there were also forks. For the wallpaper returned a controversial hard fork SegWit2x introduced on December 28 on block 501451. As it turned out later, the only common thing with the original forks was just the name. The project’s founder said on his site that this fork is supposed to deal with issues of speed and transaction commission in the Bitcoin network. He also promised that in addition to the common practice of crediting BTC holders with equivalent new coin balances (B2X), they will also receive a proportional number of Satoshi Nakamoto Bitcoins, as a reward for their commitment to the development of the project.

However, the team responsible for the new fork had nothing to do with the people behind the original New York contract and SegWit2x, which was canceled in November. Another doubts were the GitHub account, which was only a few days old, and the code written on it indicated that the team members allocated 6 million coins, which constitute 20% of the total supply. Nor was it given how the team would have possession of Bitcoin Satoshi Nakamoto which he intended to give away.