March is  behind us, but how much has happened this month – mainly in the Polish yard. The issue of the letters disseminated by the National Revenue Administration electrified the Polish community of cryptocurrencies and presented real problems to the owners of stock exchanges. The situation on the global market also has not been pampered – the prices of most crypts with Bitcoin are falling more and more. So how did cryptocurrencies cope in March?

Verge did the best, but that does not mean that the result can be satisfying. For the first time in the history of our rankings, all cryptocurrencies are in red. Probably some altcoins have recorded increases, however, let us remind you that we note the most popular and selected by you (this month Verge and Nano joined the list) so that you could create a reference base as a given coin has done over the months. The winner can therefore „boast” the result of -26%. The second place went to EOS with a decrease of -28%, while the third place went to TRON with a result of -30%. Bitcoin was ranked just behind the podium with a result of -35%.

In March, National Revenue Administration had sent letters to all Polish exchanges and cantors of cryptocurrencies. In the writings of these entities they have received a request for total customer database and transaction records. This demand is questioned by a large part of the community as unfounded. Most exchanges also share this position by appealing against this decision. What’s more, the very procedure of transferring sensitive personal data, or rather its lack, raises doubts. The information we were able to obtain shows that no clear instructions have been provided on how and to whom it should be transmitted and how these data will be stored. This raises the fear of their leakage and use for illegal purposes.

Although Bitcoin has not deepened its minimum since the last ATH, however, the next holes establish the market capitalization, regardless of whether we count Bitcoin or examine the same altcoins. On the first of April, the second hole was established after the ATH crack at the level of about $ 6,400, after which the reflection took place. However, is it only a momentary rebound or the introduction to major increases will turn out over time. The market capitalization of the entire market is „only” $ 275 billion, while during the previous minimum on Bitcoin ($ 6,000 Bitfinex) was $ 340 billion.

A special escape can be seen on the altcoins. The recorders lost nearly 90% from the last summit, for example NEM or Cardano. While capital generally escapes from the market, people evacuating from altcoins do not always choose FIAT money, but sometimes Bitcoin. This may be one of the reasons for the rather dramatic situation of most projects. It is worth noting, however, that these are still very high levels compared to the beginnings of the bubble a year ago. For comparison, DASH currently costs around $ 300, and a year ago only $ 50, but it’s nothing compared to NEO: $ 0.19 at the beginning of April 2017 and over $ 50 today. Although the declines were big, it is still „what to fall from”

Most important events in March:

Falls, falls, falls! Although still deep and dynamic, it is not only them who excite cryptocurrency community – especially with Polish citizenship in the ID card. Although it has been known for a long time that the Polish government is not in favor of currencies initiated less than a decade ago by Satoshi Nakamoto, the last days of March aroused a storm in the Polish community. KAS, or the National Revenue Administration send letter to all Polish exchanges with request to provide personal data (along with the addresses of cryptocurrency adresses) of all users for the years 2016 and 2017 in order to collect „analytical” data. Following the voice of many lawyers – according to the law in force, stock exchanges are not obliged to collect this data, then the behavior of Polish tax authorities raises a lot of controversy.

In Poland, at the moment, you can meet several mutually conflicting tax interpretations regarding settlements of revenues from trading in cryptocurrencies. There is not a single person in this country who could be sure that he or she is settling in the right way. The community is not shocked by the fact that cryptocurrencies must be paid income tax, because it is obvious for the vast majority, but the way it is calculated. Institutions get lost in their own explanations, and the content of individual interpretations and the suggested method of calculating the amount of income and profits depends on the personal attitude of the person who creates the given interpretation. It is to be hoped that the correct methods of settlement will be described and settled soon – at least before the tax authorities start handing out fines for incorrect settlements.

March again abounded in many political events around cryptocurrencies, not only in Poland. US sanction to Petro’s Venezuelan cryptocurrency, messages from the G20 meeting, ban on cryptocurrency ads on Facebook and Twitter, and at the same time the Twitter CEO’s message that bitcoin will be global currency in the near future. Despite many good news, the exchange rate remained in a downward trend. After initial increases to over $ 11,500 and an attempt to break the downward trend, bears entered the game, pushing again the rate, with smaller adjustments on the way to levels below $ 7,000. Although for many these levels seemed unimaginable a few weeks ago, today they have become a fact. Sales pressure still seems large, but it should be remembered that the upward trend lasted for over two years, and its current correction – only two months. I am not suggesting further declines here, however, one should not expect an attack on ATH as soon as a few candles on the graph are greened, because the market sentiment and the trend have definitely changed.

March at the beginning of the month gave to the test of a double local Bitcoin peak around $ 11,700, the demand was too small to break this level and later another very large declines in cryptocurrencies began. Altcoins suffered more because investors began liquefying them, and later they sold their btc, so that they would not lose more. At the forefront of cryptocurrencies, Ethereum lost the most. Investors decided that ICO advertising bans on social media platforms will strongly affect ETH demand in the future, and several large ICO projects sent their funds to stock exchanges, which only fueled a stronger correction.

In addition to these events, we still had a G20 meeting, which was to deal with the regulations of the cryptocurrencies as one of the topics of the meeting. This turned out to be too much inflated, because for financial institutions currently Bitcoin and cryptocurrencies do not seem to be a threat. After that, the exchange rebounded, but the supply was too big for demand. All the time, the indicators that I follow show that the new cash inflow to the market is much to small. The situation is not as beautiful as in December 2017. Google Trend is scrubbing the bottom of the main queries, volumes are decreasing, and alt / btc pairs are definitely much lower than in 2017. Online people are also losing, while ICO projects are still accumulating substantial amounts, an average of 10,000,000 – $ 30,000,000. Further declines, however, will lead to more conservative approaches of investors and ICOs will collect less and less money, which does not change the fact that they are still big money in relation to what these projects offer (usually the promise of future token functionalities).

The price of Bitcoin is approaching an interesting level of $ 6000 (double bottom) – $ 6,550, and there we can wait for a longer reflection, then the region good for observing and considering entering the long position is $ 4,800-5200. Going below $ 6,000 on Bitcoin will bring even more panic to altcoins, which also creates a very good shopping opportunity.

Another month is behind us – March. The end of March is not only the end of the month but also the end of the first quarter of 2018. As it turns out, this period was not one of the best  on the cryptocurrencies market. Despite the fact that in the first half of January the market for digital currencies was valued at historical 835.5 billion $, it is currently worth only 270 billion $. This means that in less than three months the market evaporated over 565.5 billion $, so 67.68%.

Taking into account the digital gold prices over the past month, we notice that the rate has fallen by more than 30%, which gives an average of more than 1% of decreases each day. What’s worse, from a technical point of view nothing indicates that this situation would suddenly change. It seems more likely that the area around 6,000$ will be tested again soon and it can not be ruled out that the depreciation will even deepen to 5,000$.

The past quarter was also extremely interesting in terms of industry information regarding the introduction of possible regulations or settlements. One of the hotter topics of the last days and at the same time what can have a significant impact on the perception of the digital currency market in Poland the recent activities of the National Revenue Administration, which want to have access to:

Looking at the capitalization chart of the entire cryptocurrency market, we notice that the whole month is in a downward trend. The highest value this month has reached over 471 billion dollars, and the month ends with a result of 267.5 billion dollars.

In the last 3 months, the capitalization chart is as follows: 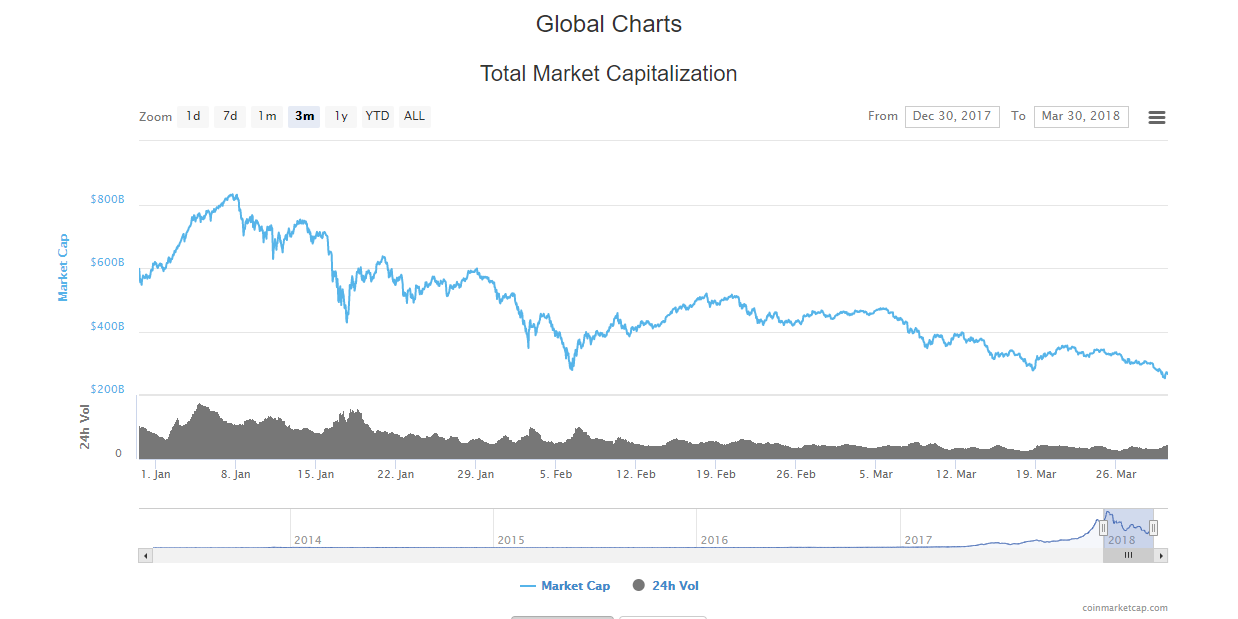 Bitcoin domination, however, behaves completely differently and from the beginning of the month its constant growth is noticeable. At the moment, we are closing the month at 45%. 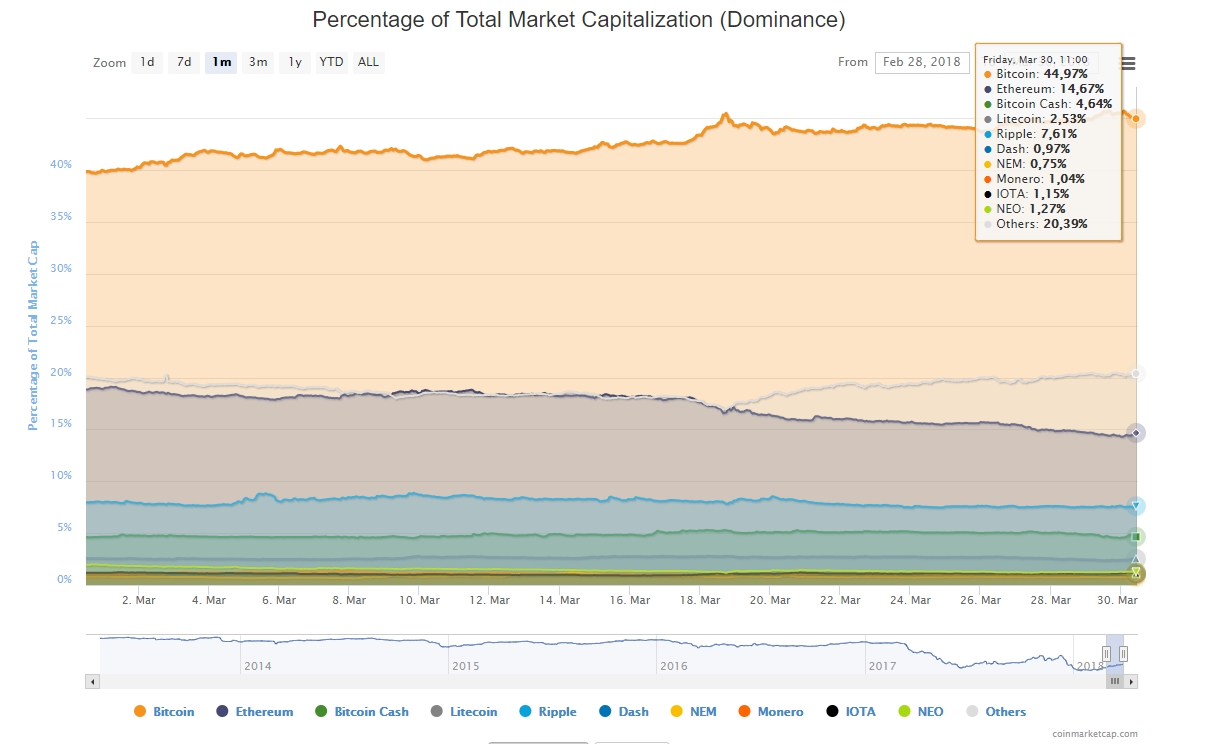 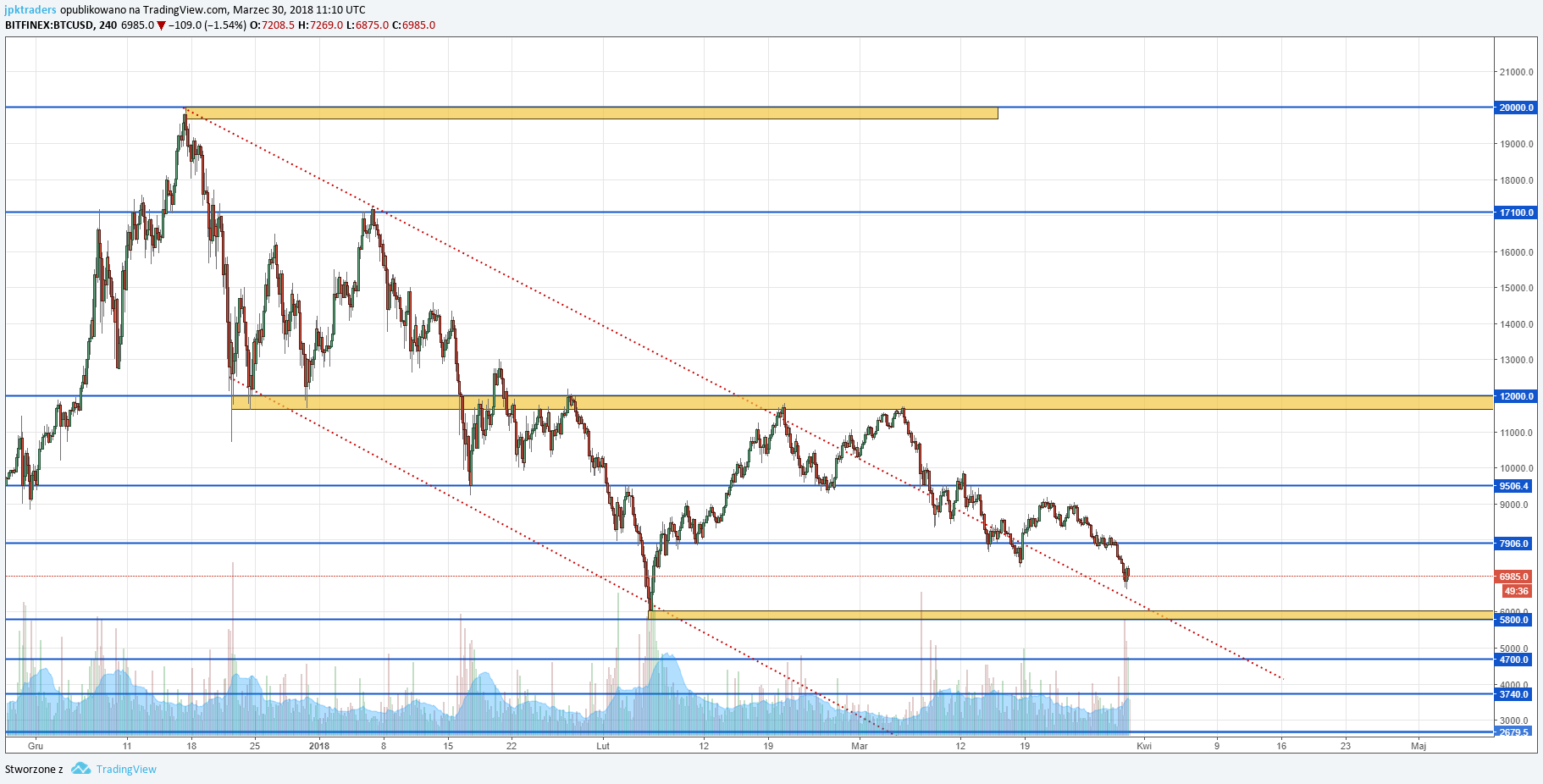 In a very similar situation is ETH, which also moves in the downward channel. There is a different situation here, that we have not even gotten out of this channel. Constantly the upper limits are so strong that the attempt to break the mountain taken in the beginning of March, ended in failure. 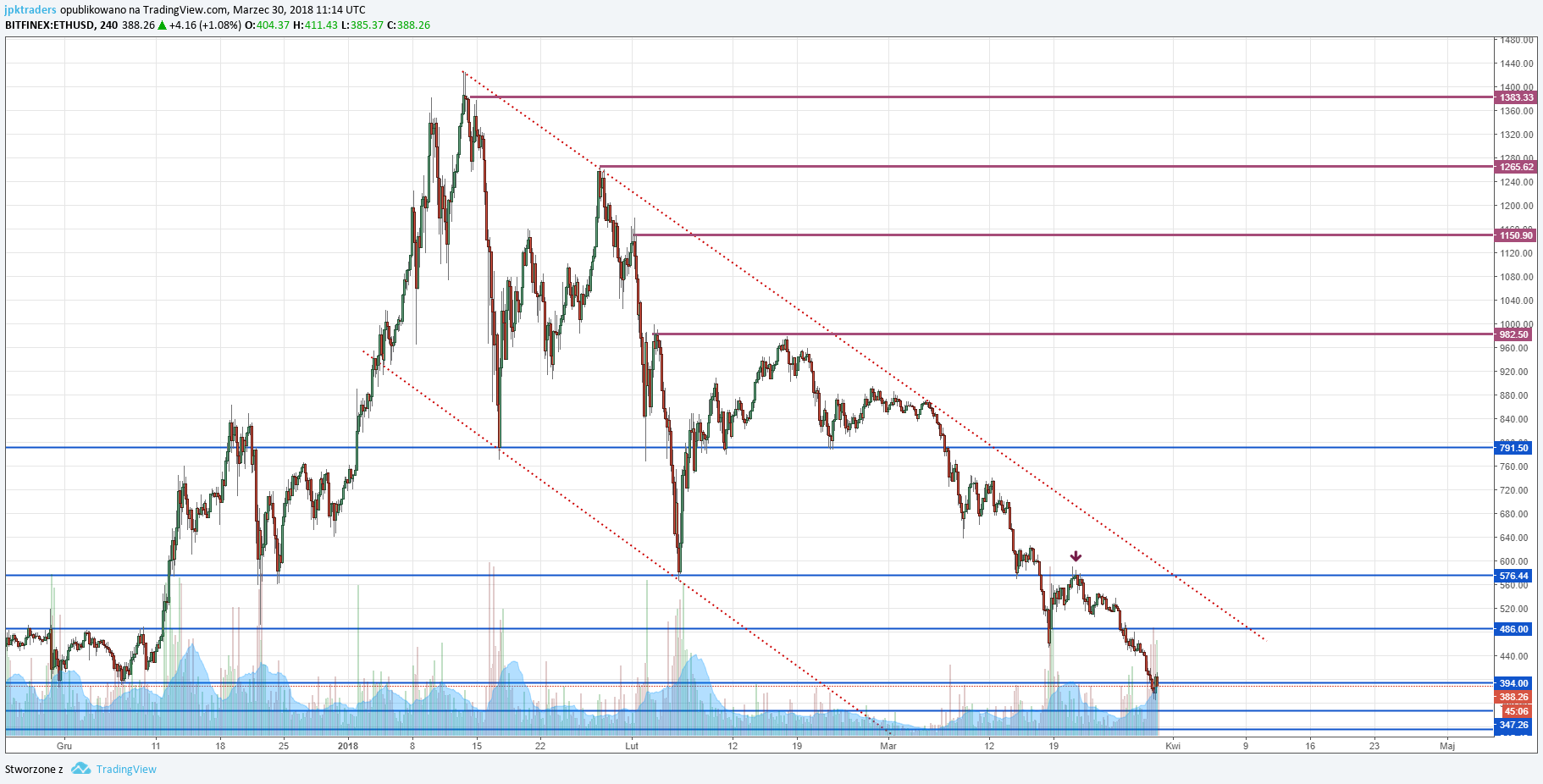