January began as in previous years – with the declines. This month was definitely a bear market, and many people were confused about the future of Bitcoin and other cryptocurrencies. In January, the euphoria associated with constant increases began to turn into anxiety, doubts, and even fear. So how was the situation on the market in January?

The winner of the ranking is NEO, which increased by „only” 88%. Such a profit, for example, on the stock market would be something amazing, but in the world of cryptocurrencies 88% is a rather mediocre result. For comparison, in the ranking covering the entire 2017 NEO took the second place with a result of over 52 000%. The second place was taken by the somewhat forgotten currency of Steem, while the third took the Nexus. Both coins, respectively, with a return rate of 70% and 56%. Podium is therefore dominated by currencies that do not play a leading role in the world of cryptocurrencies. Bitcoin, Ethereum, Ripple or Bitcoin Cash are on lower positions.

Market capitalization dropped from just over $ 600 billion to around $ 485 billion. At its peak, however, it was close to $ 830 billion – the road to 1 trillion seemed so simple. Interestingly, the Bitcoin dominance coefficient also decreased. In the past, during the market downturn, this ratio usually increased, as most investors „escaped” from altcoins to Bitcoin as a relatively safe asset. Of course also not a small part came out completely on FIAT money (dollar, euro, etc.).

Most important events in January:

On the last day of January, bulls are desperately trying to keep the bitcoin price above $ 10,000. This month undoubtedly belonged to bears. The buyers were not able to overcome the downward trend and the forming system of ever lower pitches and peaks. Information flowing from the world of global politics also does not help. The tax situation in Korea, Tetra’s problems or the statement of the Polish Prime Minister after the Davos meeting are not conducive to the creation of a favorable atmosphere around cryptos.

Many analysts believe that a fall to $ 8,000, and then $ 5,000 is just a matter of time, but notice that sometimes when everyone believes that a given thing will happen, sometimes something completely opposite happens. Especially in the current situation, when cryptocurrencies become an extremely sensitive asset for any information coming from outside. It seems that partially situations indirectly related to bitcoin, but nevertheless to its surroundings, significantly influenced its course in January.

But not only this.

There is no doubt that bitcoin needed to recover from crazy increases. Corrections on the market are definitely a positive phenomenon, especially in the long-term and should not be negatively perceived, although for new investors they are definitely very severe. Although many have already seen bitcoin for 20 or 30 thousand dollars, it’s hard to accept the price of $ 10,000. Remember, however, that it is still one more „zero” than a year ago at this time.

January was the month of deepening the correction on the cryptocurrency market. The continuation of the correction and the abolition of increases turned out to be lethal for the value of wallets expressed in fiat money. The correction also gave vent to new attacks on cryptocurrencies, which were read by many investors as a reason to continue the sell-off.

January is also the month in which the first cryptocurrency ranking developed by Weiss appeared. It brought a change in the perception of the market for many investors. The first position in the ranking for ETH with a B note was a surprise, while Bitcoin received a C + note. Among the cryptocurrenses, it was Ethereum that was noticed by financial institutions as a cryptocurrency, which has applications that go beyond the cryptocurrency market itself. The position of ETH also confirms the strength and stability of the exchange rate against other cryptocurrencies.

New depots and defence of the BTC exchange rate in the range of 9,000 – 10,000 USD give hope for the completion of the correction, which has been ongoing since December 17 last year.

BTC exchange rate moves in a downward channel perfectly visible in the graphs in a logarithmic scale. Unfortunately, the current correction broke the parabola, which the chart respected during the increases.

I would like to point out that cryptocurrencies play the role of avant-garde assets. The changes that take place on the cryptocurrency market after some time appear on mature markets. Only recently, contracts for the Dow Jones index (DJIA) broke the parabolic movement, making a correction. The anticipated correction for DJIA can reach 10-15% which, taking into account the dependence of the anticipatory nature of price movements on BTC and other cryptocurrencies, allows to expect a possible rebound of decline or end of correction.

Another month is behind us – January. Looking at the graph of the overall capitalization of the entire cryptocurrency market, we notice that it was not an easy month for digital coin enthusiasts. The valuation of the entire market has shrunk by more than 95.7 billion USD from almost 613 billion USD to just over 517 billion USD. The huge, over 37% , share in this depreciation had a drop in the value of digital gold, whose capitalization decreased by over 35.5 billion USD.

This situation is reflected in the Bitcoin chart. Its value has fallen over the last month by almost 4,000 USD from 13,880 USD at the beginning of the month to 10,000 USD currently. Monthly minima were in the area of technical support of 9,200 USD and this was exactly on January 17 this year. This fact made the range of the whole, lasting from the second half of December last year, exceeded 53%.

Will this time the „January effect” work and the value of digital gold will not fall below current levels?
In January, we could also observe a slight decrease in BTC’s dominance (from 38.59% to 33.51%) and the share of „December star” – Ripple (from 14.48% to 8.58%). Ethereum, which increased its share in the digital currencies market from 11.94% to 21.19%, significantly increased its strength.

The first month of the new year on the cryptocurrency market is behind us. Definitely the beginning of the year was not good for increases in terms of capitalization, price and Bitcoin’s dominance. The very capitalization of the entire market has fallen from 600 billion USD to 500 billion USD at present, and its minimum value in the past month was even below 430 billion USD.

The Bitcoin dominance dropped from almost 39% to 33.5% on the current night. 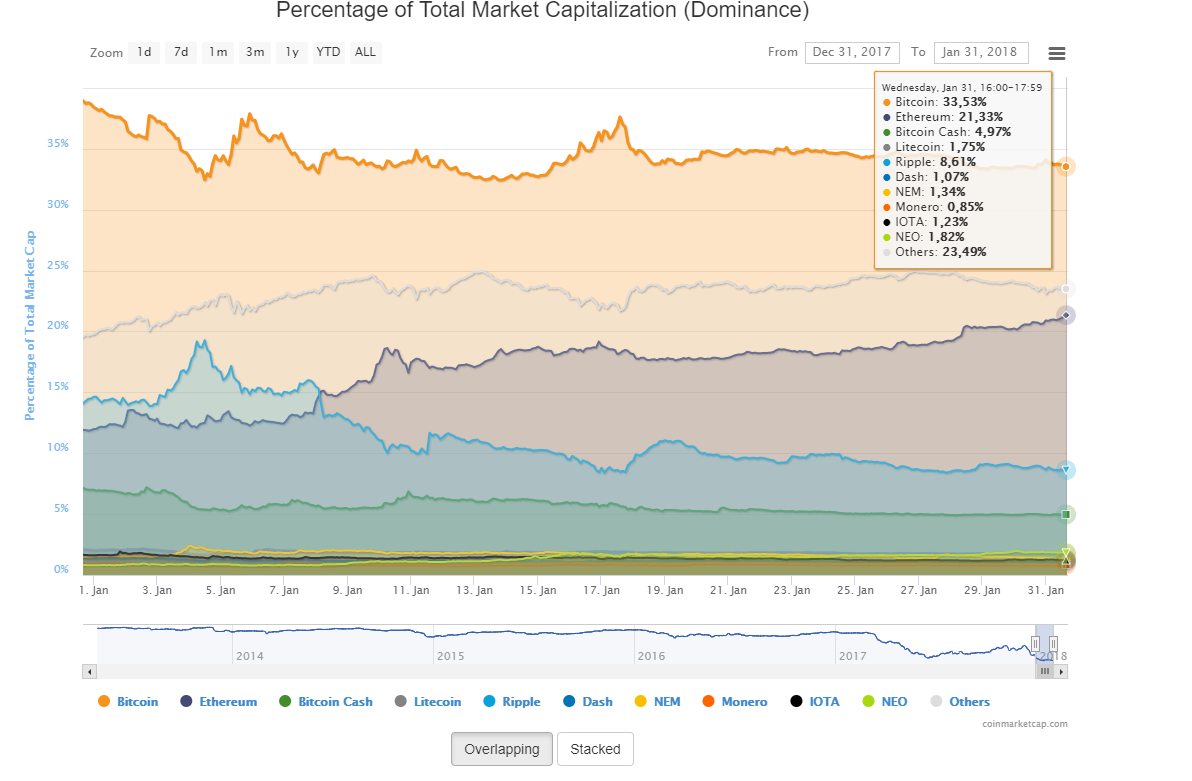 Second place in the cryptocurrency ranking was regained by Ethereum, pushing Ripple to the third. 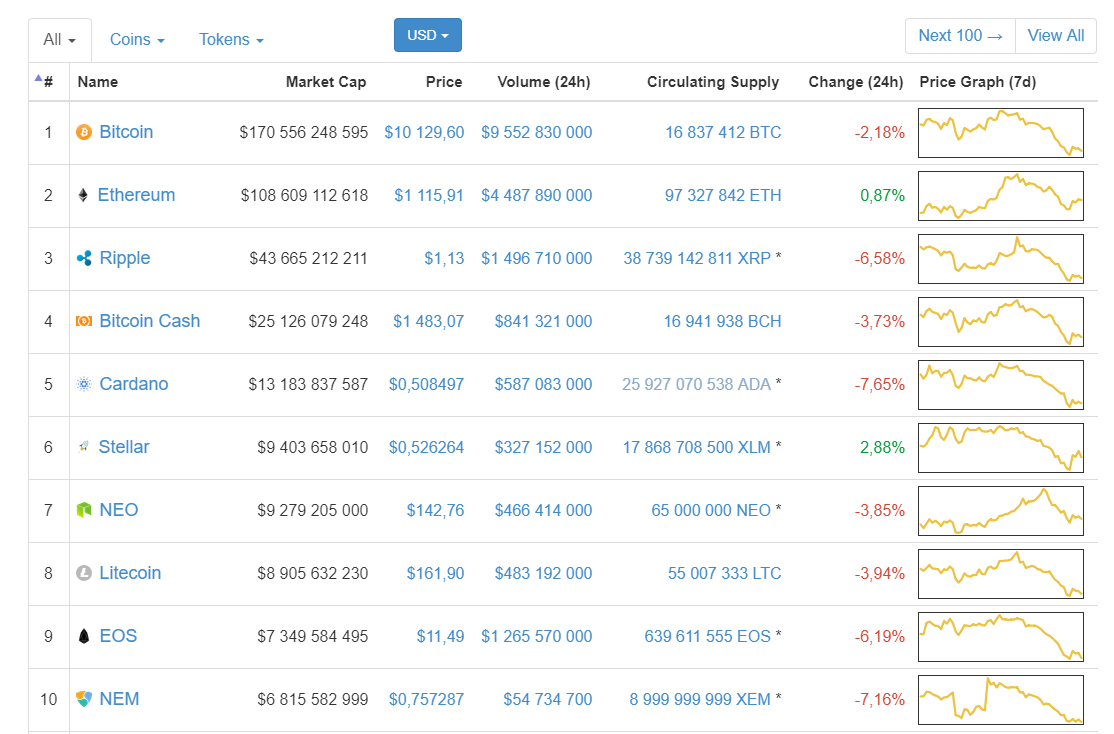 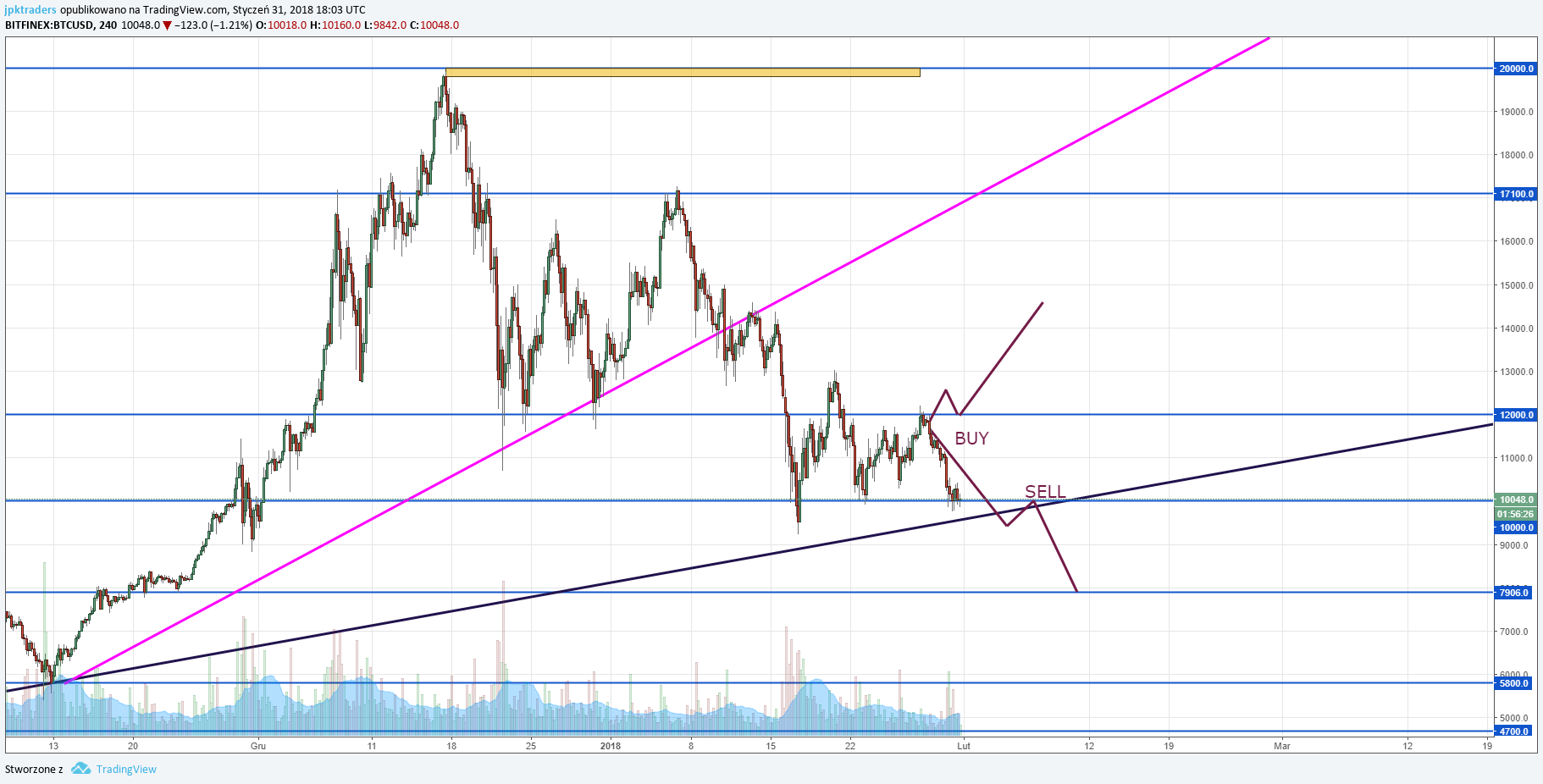