Many things hapenned in cryptocurrency world during October. From Ethereum and Bitcoin Gold forks, through exchganges` problems to new Bitcoin ATH. Market capitalization has risen from $146,438 bln to $182,387 bln. It`s worth mentioning that at the same time capitalization of Bitcoin itself broke through $100 bln for the first time in the history. Top three currencies in October are unsually in fact top 6 cryptocurrencies: Stellar Lumen – 109%, Bitcoin – 48%, Ripple, Ethereum, Bitcoin Cash, Litecoin – 2%.

These three cryptocurrencies are in fact only coins which allowed to gain in October. It is mainly a result of Bitcoin. Just in the beginning of October it was falling down to $4000 but it closed month with new all time high – $6481 as for now. This time growths of Bitcoine didn`t mean the same with altcoins, as before. Market cap shows it straight: record in case of Bitcoin but only slithly higher than previous peak from 1 september in case of market as a whole.

Japan and South Korea are contiunuesly enlarging their Bitcoin shares. It is happening mainly because of situation in China. Government has banned ICO and closed crypto exchanges. Majority of chineese operators are moving to nearby countries – mainly to Japan, where a least 19 have applied for appriopriate license. Japaneese yen and southkorean won are responsible ffor over 3/5 of world Bitcoin wolume. Along with US dollar they are responsible for almost 95%. We can see that it is the East that start to play the first role on cryptocurrency market, not the West.

Important event in Octboer was Bitcoin`s fork. What`s interesting, in November we will probably experience the same (another fork I scheduled around 20th November). Many people talked about cartain Bitcoin fall, as soon as fork happens. This is because majority of investors wanted to get “free” Bitcoin Gold tokens according to number of Bitcoin they had during fork. However, as we can see Bitcoin is growing systematically, whereas Bitcoin Gold is staring to be forgotten – as Bitcoin Cash. Yet, in last days of October Bitcoin Cash started to rise and returned to almost $500.

Most important events in October:

Another emotioning month and another Bitcoin ATH. BTC reaches over $6400 as I write this article. Celebrities in the world of cryptocurrency – and not only – are trying to foresee future price of Bitcoin, future and of course higher. Once abstract price projections, such as $20 000, does not make impression on anybody now. Many believe that growths will last forever and we have to remember that the biggest euphoria usually happens during peaks. In no case this statement is forecast of falls, rather a warning especially to people who joined cyrptoworld in 2017 and have no idea about other conditions than ever-growing Bitcoin price. Other cryptocurrency had to move in the background.

Bitcoin surpassed round $100 bln in October. It is a clear signal that it gets closer to gates of financial heaven. However, if bitcoin wants to get into to the wolrd of companies and corporations, its price and usage must grow many times. The price does pretty well right now but it is the usage that suffers. Conflicts in developers team, transaction fee level and another fork (creating third coin with “Bitcoin” in its name) don`t make it easier. And probably the biggest split is still ahead us.
Some of New York Agreement signatories are retreating. Core dev team statements cause bigger and bigger possibility of another Bitcoin chain in November. In short perspective it may be worthy for investors (they will receive the same amount of new tokens) in the moment of fork. Price of each token may reach several dozen dollars. However, in the long term it may be harmful. Imagine a situation that newcomers to Bitcoin market have four coins to choose. Which one is going to be “the original”?

Lets hope that current problems in a long perspective will be positive in the field of Bitcoin development. Bitcoin as an opensource and decentralized project that is cheap and usefall as it meant to be.

October meant Bitcoin price records but it was also uncertain for crypto users. Why? Bitcoin Gold hard fork and awaiting for another (Segwit2x) are the answers. Unfortunatelly, it not all because probably Bitcoin Cash fork is ahead of us. It is supposed to improve convtroversial difficulty mechanism. None off the forks have implementation of replay protection. It may cause uncertainty among current and future crypto users.

It is a characteristic of community that it sees fork as an opportunity to gain, as it was during Bitcoin Cash fork. However, that case was planned and it was supposed to implement certain mechanisms in Bitcoin source code. Currently the plan is to “kill” one of chains. As a result, one should not await benefits, excluding situation with Bitcoin Cash where removing EDA algorithm defects may improve demand.

Litecoin stable, yet weak position may worry. Although there is uncertainty on the market, there is no retreat form Bitcoin to Litecoin. We may see such retreat in upcoming days or weeks. LTC remains certain and stable cryptocurrency which enables fast payments. Technically, price remains in ascending wedge. It is obvious that in current situation market focuses almost entirely on BTC and doesn`t care about others.

In October Chinese exchanges had to close their activity and so many seeked news from China that eventually government will change it mind. This didn`t happen. In October we witnessed also big demand for mining rigs collocation in Data Center, when such possibility ended in many places in USA and Europe. Closing of Chinese market played its part too.

We were also witnessing disappointment of miners who bought Bitmain`s D3 mining rigs and didn`t consider Dash difficulty changes. In fact, not only Dash difficulty but all x11 algorithm cryptocurrencies. Theese miners saw only beginning profits possible to achieve thanks to new hasrate power of mining rigs. Many of them were also surprised by high costs of electricity and noise.

October was without a doubt month of full Bitcoin domination. Whereas majority of altcoins entered horizontal or even descending trends, Bitcoin was growing. Only during this month BTC/USD pair grew 48%. This is a new all time high above $6400. It is worth mentioning that current historical peaks where reached in the 9th anniversary of Satoshi Nakomoto Manifesto.

Bitcoin domination is clearly confirmed by price records. Majority of xxx/BTC pairs are in strong descending trends. This is nothing surprising however. When in October market cap of all cryptocurrencies grew $34 bln, Bitcoin itself grew $33,3 bln surpassing $100 bln. This means that excluding Bitcoin market cap of other coins grew only symbolically. All this caused Bitcoin retaking its domination from 48,77% 1st October to 58,31% 31st October.

We also witnessed second Bitcoin hard fork resulting in Bitcoin Gold creation. As for now majority of people did not get their BTG so it is hard to predict what is going to happen with the project. This is because investors are both likely to sell their coins immediately or buy more tokens.

Apart from this, more and more people from the community – and not only – start to comment on Bitcoin. Here are some interesting quotations:

October was definitely a month of profits when it comes to Bitcoin. Those who didn`t have this currency before and bought it in this month can now celebrate gains. Below is a chart showing Bitcoin price in the last 31 days.

As we can see along with price also market cap grew. It surpassed magical level – $100 bln. Currently price broke through $6300 and capitalization is $106 bln. This growth is mainly caused by another hard fork, which occurred in this month. Investors bought Bitcoins massively so they could get free Bitcoin Gold after the fork. Shortly after fork price fell to $5400. However, this level appeared to be the point of balance, escpeacially compared to previous 1D interval. Therefore it was a good place to start rising. Great ending of October was information about CME, which plans to introduce Bitcoin term contracts. The market reacted optimistically and price of Bitcoin grew $200. 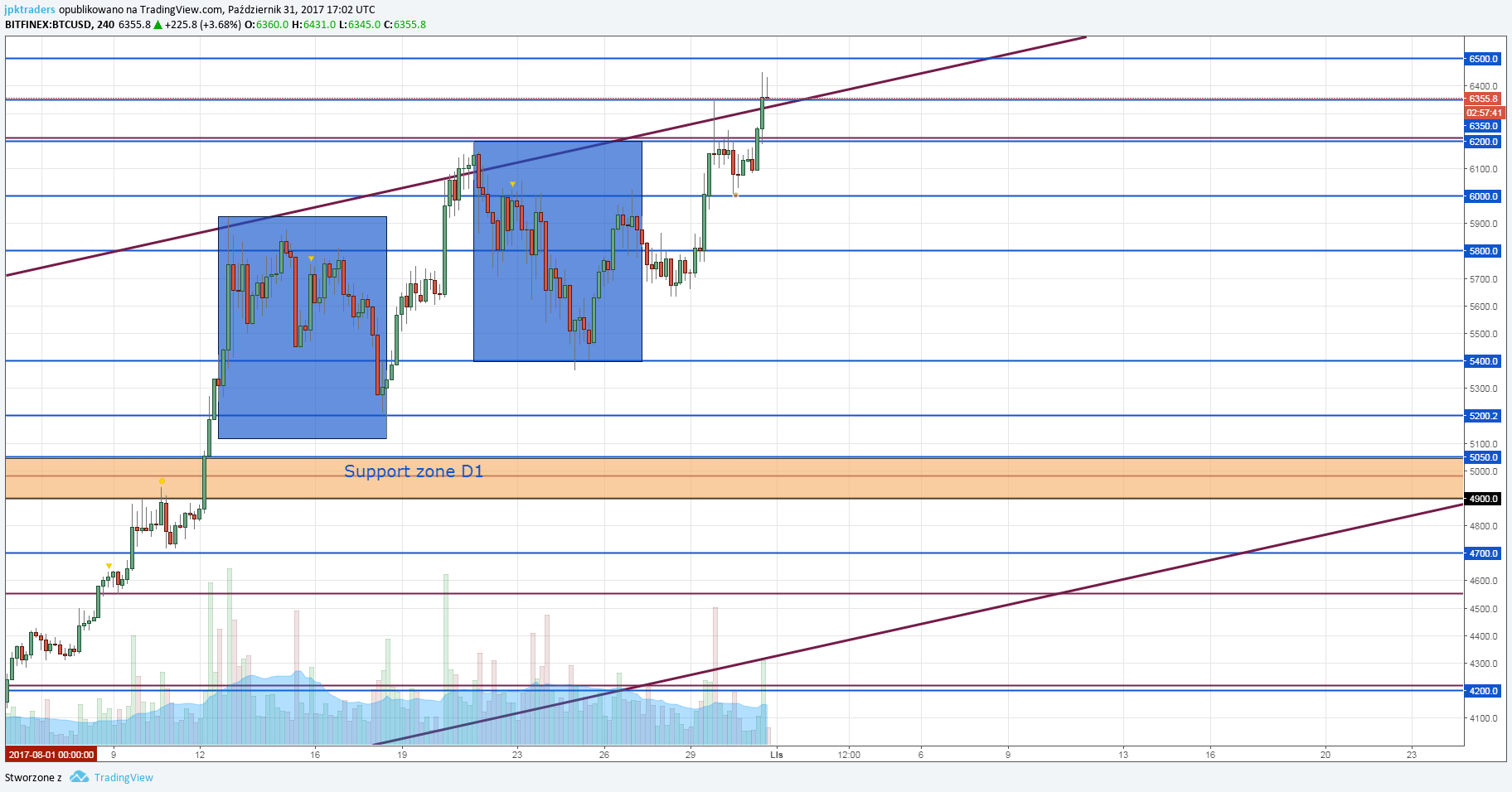 There was also Ethereum fork in October. It is a second cryptocurrency when it comes to market cap level. In comparision to Bitcoin, there was no spectacular growths here, even opposite. Before fork Ethereum`s price moved between $277-$315. Before fork price started to rise and reached another resistance level ($350). After that it price returned to consolidation levels in which it stays till this day. 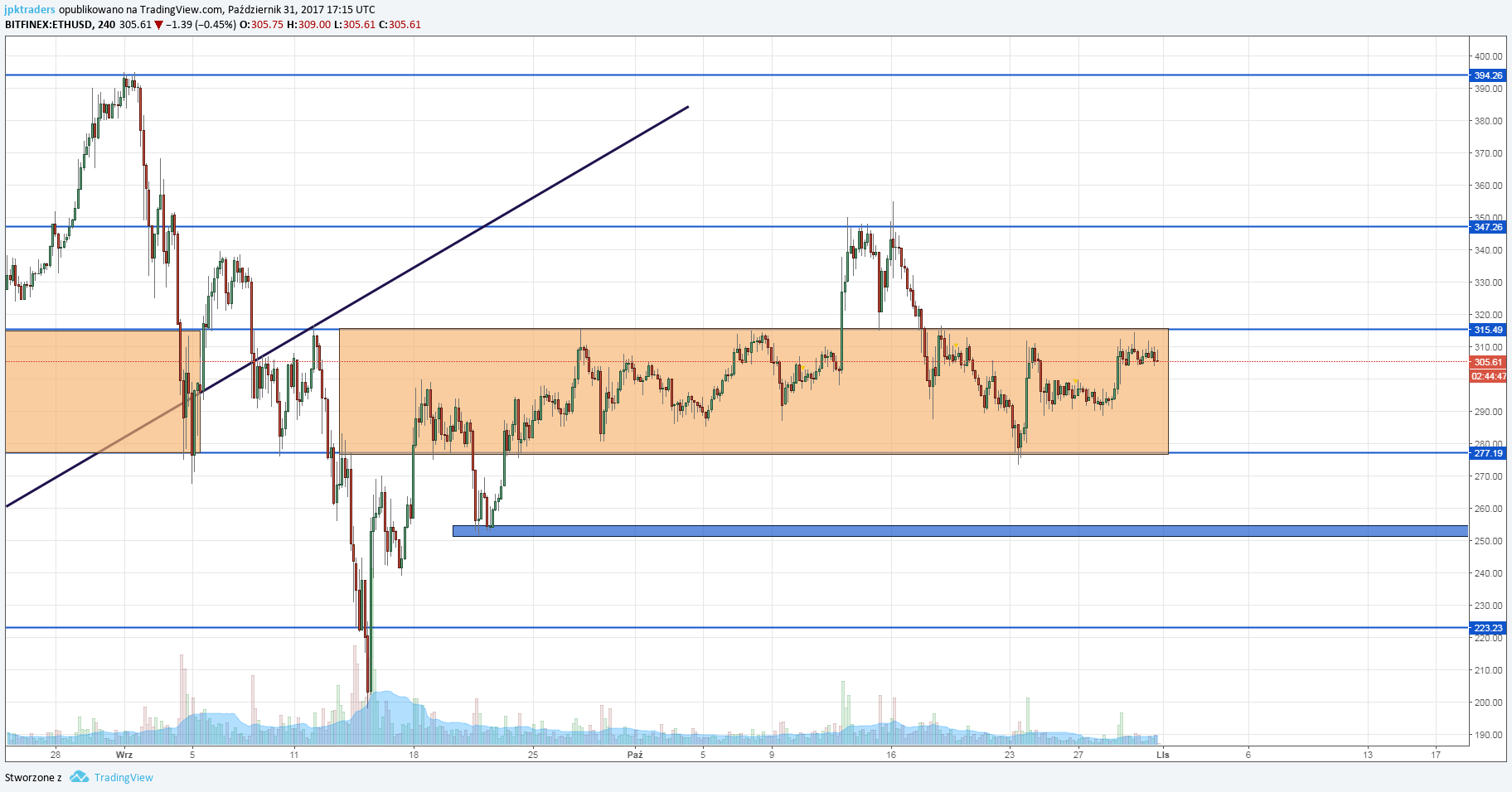