February was a month of uncertainty in the cryptocurrency market. This is confirmed by a small final capitalization change (though the fluctuations were bigger during the month), Bitcoin’s fall to around $ 6,000, nervous investor movements, fear of social media emerging, or poor performance of most cryptocurrencies. There are signals indicating the continuation of the bear market, but on the other hand bulls do not want to give up, raising the price of Bitcoin to around $ 10,000. What happened this month and which coin turned out to be the best investment? We invite you to read.

Podium looks very interesting. The winner is quite unexpectedly Litecoin, although the rate of return compared to previous months may not be spectacular and amounts to only 30%. Just below is OmisseGo, this Asian project brought a return of one percentage point smaller than „digital silver”. The third place belongs to Ethereum Classic with a score of 23%.

What’s interesting, just outside the podium are well-known projects such as Monero, Bitcoin, Dogecoin, Zcash, NEO or Dash. It can be seen that most of the older projects have done well. As far as we can talk about coping best in the case of results fluctuating between 10% and -13%. However, this is also not an iron rule: projects such as Ethereum, Lisk or NEM lost 21% 28% and 46% respectively. Profit brought us only 6 projects, Zcash remained unchanged, while the vast majority brought losses. This situation, which for many was an abstraction in December, today has become a reality.

The market capitalization of the entire market slightly decreased from $ 490 billion to $ 450. On February 6, however, it reached a minimum of $ 281 billion and almost two weeks later, it basically doubled that result to around $ 520 billion. The whole graph resembles an attempt to stabilize and find an equilibrium point. The first hole on Bitcoin seems to be already known and is around $ 6000 on Bitfinex ($ 5,920 on Bitstamp). However, it is not out of the question that the next one will be even lower. It is wise to consider a multi-month slump like after the fall of Mt. Gox in 2014 as one of the possible scenarios. The current situation is different from that, so it is not the only possible scenario.

The dominance of Bitcoin itself increased slightly, exceeding 40% again. From the beginning of the year, this value fluctuated around the level of 35%. Remember, however, that in December Bitcoin was responsible for the capitalization of nearly 70% of the market.

For Bithub.pl Adrian Gozdera, our analyst Picasso and JPK Traders comment on February:

I see both on Altcoin Poland and Bitcoin Poland (groups on facebook associating people interested in cryptocurrencies) many comments and posts from impatient people who are already in the downside or are in the plus, but see that crypto courses do not grow and are impatient. Well crypto courses do not grow in a magical way by themselves. Grows results in the inflow of new capital and good market moods – the certainty that it will grow, i.e. the psychological comfort regarding market mood. Confidence on the market may be raised by some event – unexpected and positive. Negative, in turn, can further reduce the market mood (regulation, hack, ban, etc.).

As for February 2018, it was very turbulent for the cryptocurrency market. We noticed all time low this year, people were devastated and terrified that cryptocurrencies are ending, that Bitcoin has died. We fell from over $ 10,000 to $ 6,000, followed by a very dynamic rebound and if someone came in at the right moment, he could earn almost 100% on Bitcoin itself. Altcoins such as, for example, Litecoin, Neo have made even better rates of return.

What is currently visible is a some kind of inhibition and uncertainty. I see on many levels that the rates are falling, there is less interest in searching for cryptocurrencies, fewer online users on the stock exchanges, fewer comments on forums or groups, and the volumes do not resemble those of bull market. It is possible that some stimulus in the form of bad or good news will decide about further movement.

The ETF Btc road is open all the time. I think that sooner or later this will happen, but will it happen in 2018 or maybe a little later 2019/2020, when will the banks be ready with their crypto products?

As for the Bitcoin course, we are also on the verge of a downward trend initiated from decreases from the level of ATH regions of $ 20,000. For reasons of weak growth rates of new capital to cryptocurrency markets, I would rather tend to believe that if there is a breakdown in the downward trend, we will face a weak hit and enter a consolidation period rather than an attack on $ 20,000. I have recently added my thoughts to the Altcoin Polska group and possible scenarios – both positive options and those less enjoyable for medium and short-term investors.

Another month is behind us – February 2018. Looking at the graph of the total capitalization of the entire cryptocurrency market, we notice that after the dynamic declines started already in January, from February 6 the value of the entire market has slowly increased. Nevertheless, at the end of the month it reached a valuation of just 440 billion USD and therefore over 70 billion below the level from the beginning of the month.

These declines were largely driven by the depreciation of altcoins, as a result of which Bitcoin’s dominance increased over the past month from 33.50% to 40%. Looking strictly technically, we notice that digital gold prices continue to fall within the downward channel. At the moment, the course is testing the upper limit of this formation for the fourth time, where the supply reaction appeared again yesterday.

From a technical point of view, the rejection of this zone could open the way for another decline to around 9,5 thousand USD or further up to 5-6 thousand USD. If, however, this resistance was defeated, further appreciation could reach even around 13,000 USD. It seems, therefore, that we are in an extremely important place and the nearest future may also have an impact on the further valuation of digital gold.

Unusually today, we will start with the fee, because the situation in the mempool is almost perfect. Looking at the graph, we can see that it is practically empty, it means that the transfer fees are several satoshi per byte, which in effect means a transfer for several tens of cents! This is the perfect moment for transfers from your wallets with many entries to another address. It is safe to say that problems with a clogged network have already passed. The situation was improved by the implementation of Segwit by Coinbase and Bitfinex – currently the implementation level is already 25%. 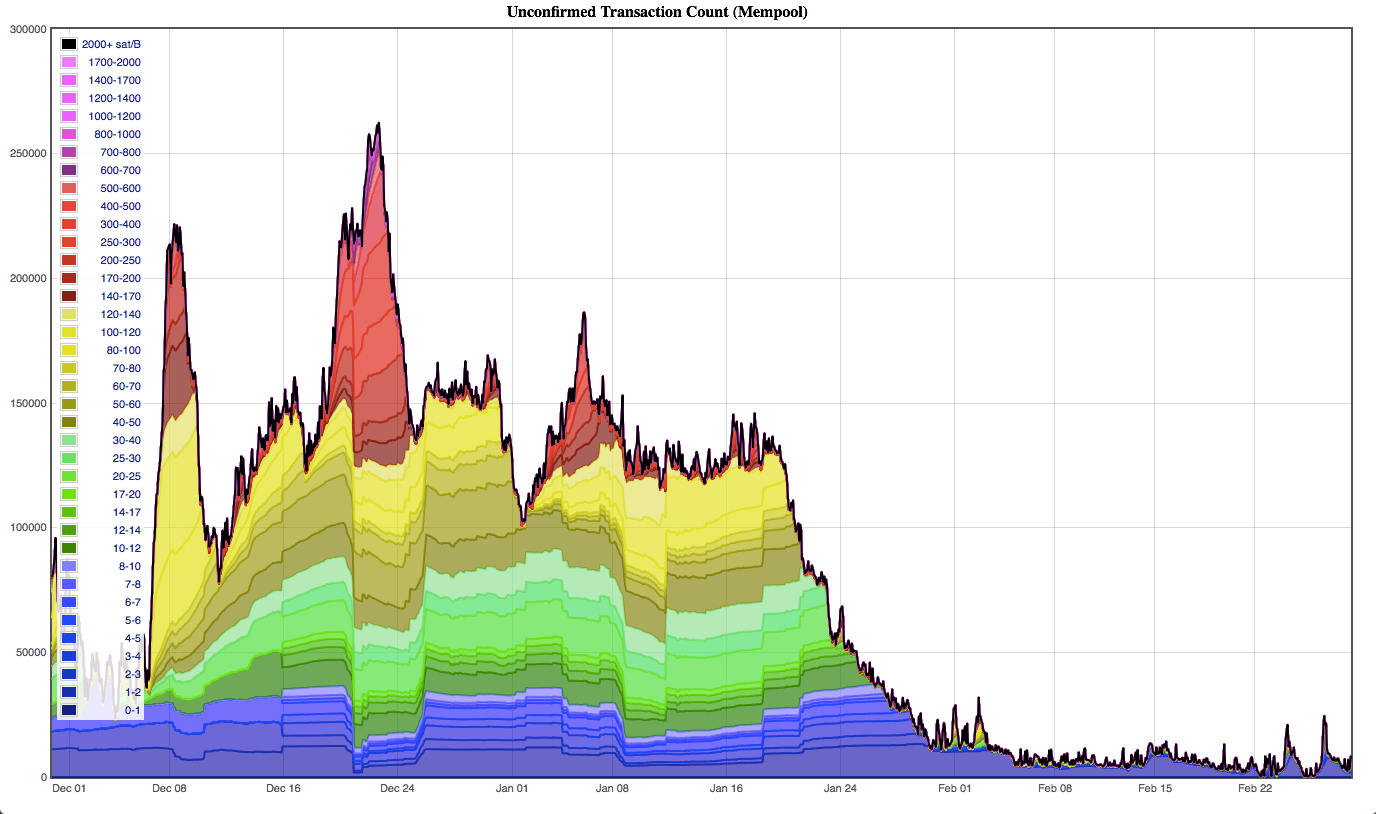 The capitalization of the entire cryptocurrency market fell from around $ 520 billion from the beginning of February to just under $ 445 billion today. The lowest value of capitalization at some point was below 280 billion.

After a month of turmoil, the BTC price remains almost at the same level as it was on 1 February. Bitcoin domination increased from 33.5% to almost 40% now. This was made up for the loss that occurred in January. 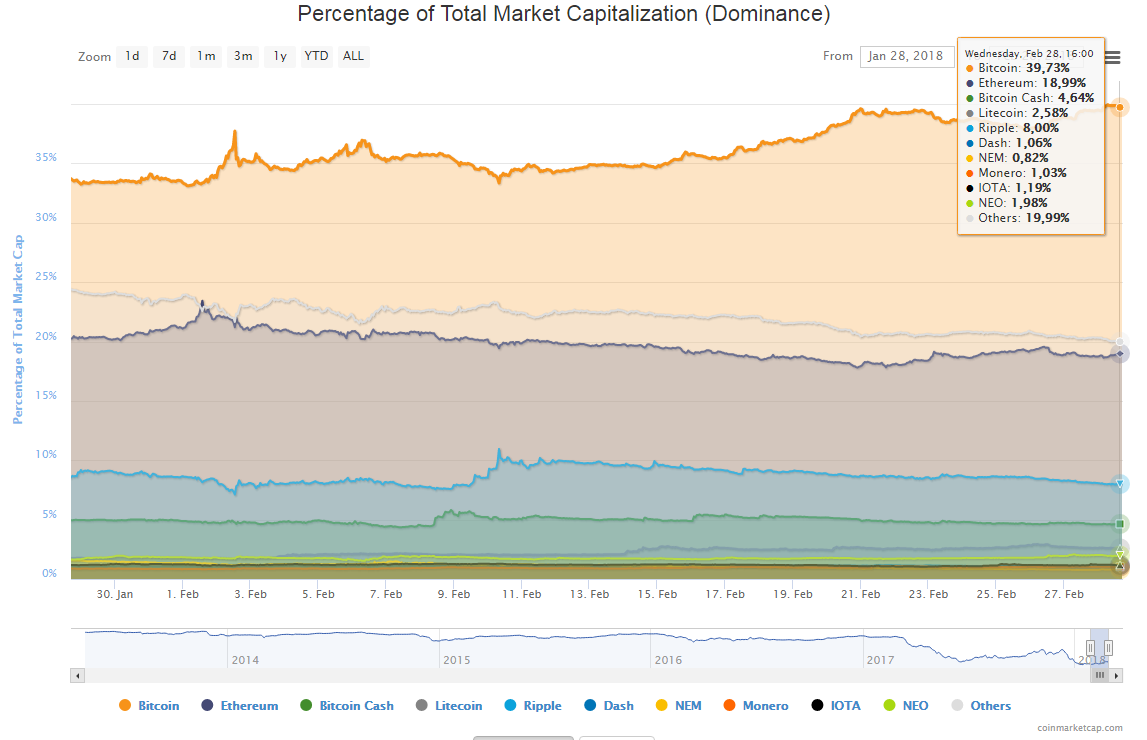 From a technical point of view, the Bitcoin course went up from the downfall wedge we set this month. It was the first barrier, which defeating heralded the recovery of declines. Another barrier – the upper limit of the downward channel has unfortunately been broken badly. The price returned to the channel range. The support that again brought the price up was $ 9,500. At the moment we observe as the price after breaking the second channel top, starts again heading to the south. As long as the level of $ 12,000 is not overcome, we cannot explicitly focus only on increases. 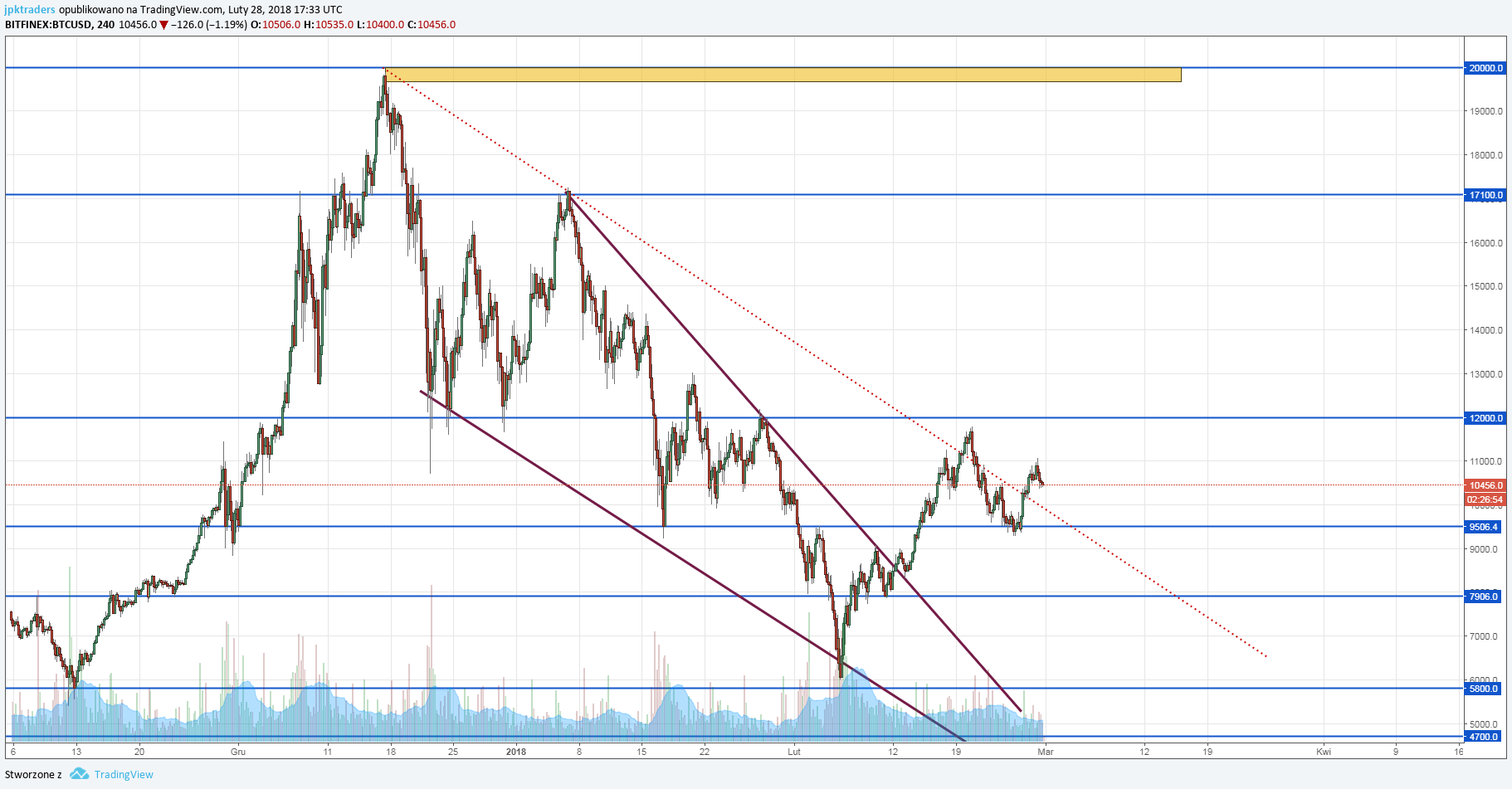