According to January review by BitHub.pl, the best performer of 2016 — Monero — did not manage to secure its high position. The biggest cryptocurrencies such as Bitcoin or Ethereum were gaining in value steadily, however they were not the fastest earners.

Those who decided to invest in Counterparty – the best performer of the review — gained 70% in a month. Not much less — 65% profit went to Bitcrystals’ investors. Listed third — Maidsafecoin —delivered less than half of the expected profit.

The leader of 2016 — Monero — lost almost 6% in value. It was among eight loosing cryptocurrencies of the month, being ranked second to last.

The value of Waves, which was classified last, came down by almost one tenth.

In comparison with 1st of January, on 1st of February the value of 12 coins went up. Bitcoin grew by almost one per cent, which was the lowest growth noted. However, Bitcoin’s being the biggest of all cryptocurrencies makes it also less prone to value fluctuations.

It must be noted, however, that over the period in mention Bitcoin’s value went over a few bumps. At the beginning of January it almost hit its historic high, only to loose almost 10% afterwards. At the end of the month there was a rebound which caused its month-on-month rate to go up.

In January the interest in cryptocurrencies’ stock markets was also changing rapidly. Leverage trading in China was halted and transaction fees were levied. It caused dramatic loses for „the Great Three”. Investors are naw watching Bitfinex carefully, as it is the cryptocurrency which currently holds leader’s position. 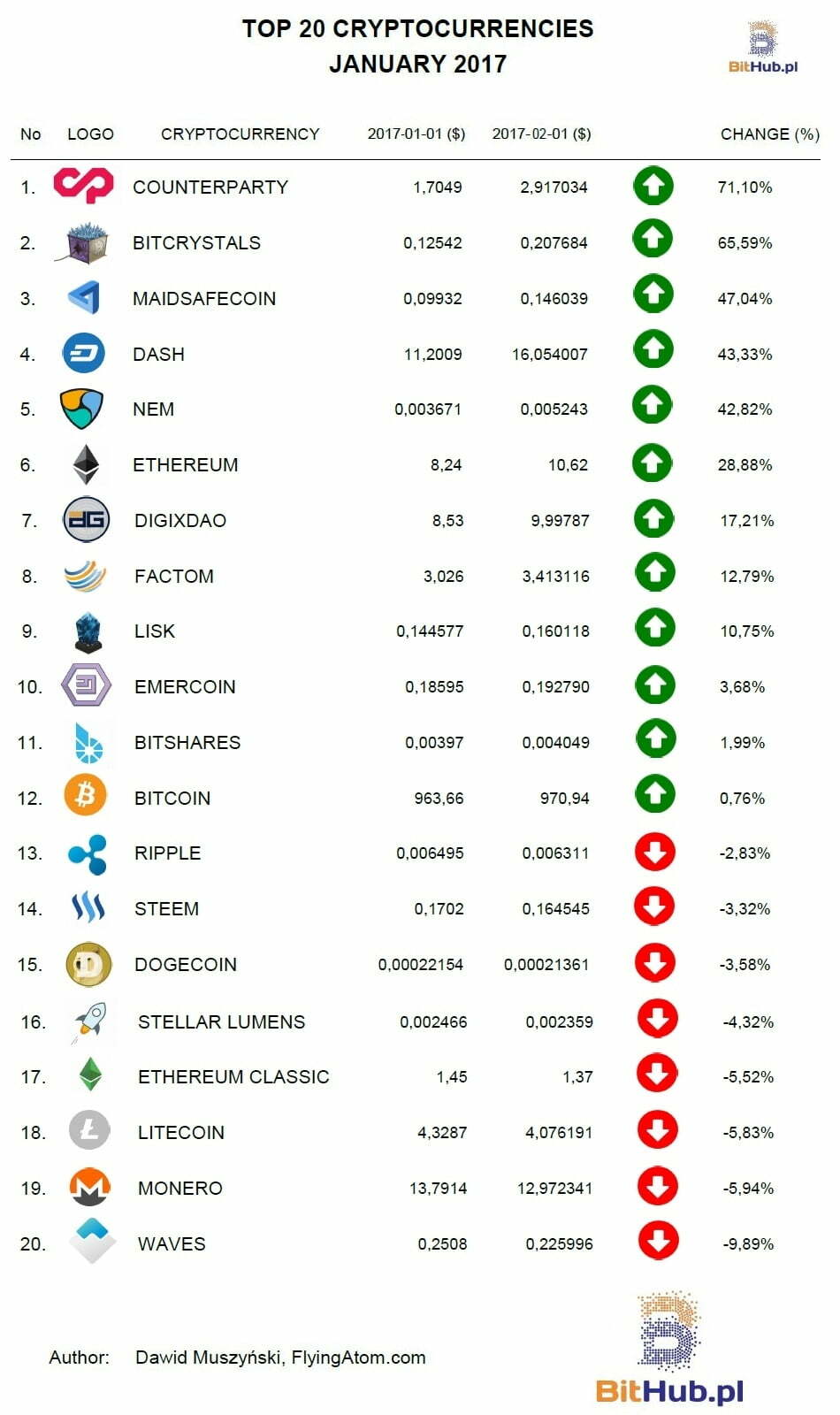 In January, cryptocurrency market was divided into two phases. In the first phase, the main characters were bitcoin and anxiety associated with Chinese market: The biggest exchanges, which generate 90% of global bitcoin volume, were controlled by the officials. After PBoC intervention leverage trading disappeared and trading fee had become obligatory. Almost until the end of January trading on bitcoin freezed. This was the reason why investors turned to altcoins, though wiser ones accumulated coins much earlier. The biggest impulse for the return of altcoins („altcoins are back” – famous saying form twitter gurus accounts) was given by Pascalcoin. Those, who bought this cryptocurrency on niche exchanges in the begging of January or earlier had an opportunity to multiple their holdings on average of 10x-164x. In the peak day volume on Poloniex – the biggest altcoins exchange – was larger than on the biggest bitcoin stock markets. However, the gold fever didn’t last long. Currently, price moves in descending channel defending lower and lower levels, though still much higher ones than those from the begging of January or when Pascalcoin had its debut on Poloniex. During Pascalcoin`s rise investors/speculatnts/traders started to move on to another projects – both old and new ones. Literally, in just a week most of cryptocurrencies had risen. This capital diversification resulted in short pumps – usually, after few hours price had returned to its starting position.

In my opinion, Pascalcoin is typical cryptocurrency which was chosen by P&D group with large capital Of course the wanted to have a gain. They have been buying it on small exchanges and mined as well. Then, they took the opportunity and started to sell on biggest exchange: „let`s rise the price as much as we can and when it won’t go up anymore we`ll start to sell our coins”. It could have been first rising wave and another one might occur after publishing some innovation supported by cool graphics, arts or marketing action. In time we`ll know – the market has to be watched carefully