Last month the most popular cryptocurrencies took the lead again. Some of those that strongly gained value was Bitcoin and Ethereum. What else surprised the world of cryptocurrencies? Below we present you the ranking prepared by Dawid Muszyński for Bithub.pl

There was a big success for Dash Coin, the coin created in January 2014. People who bought it on 1st of February, were able, just after one month , to withdraw over 100 percent of their contribution. Ethereum scored about half of that result, so you could have gained there an additional 50 percent. Also noticeable was the recovery of the value of Bitcoin, which last month noted a profit of just fractions of a percent, now gained over 20 percent.

Compared to the previous ranking of January, more coins have lost value than gained. Generally losses were at the level of just few percent and very easy to retrieve. However, Steem surprised everyone with an over 35 percent drop. The currency, which can be gained mainly by publishing interesting content on web portal Steem.io, compared to it’s results in January is not doing very well. 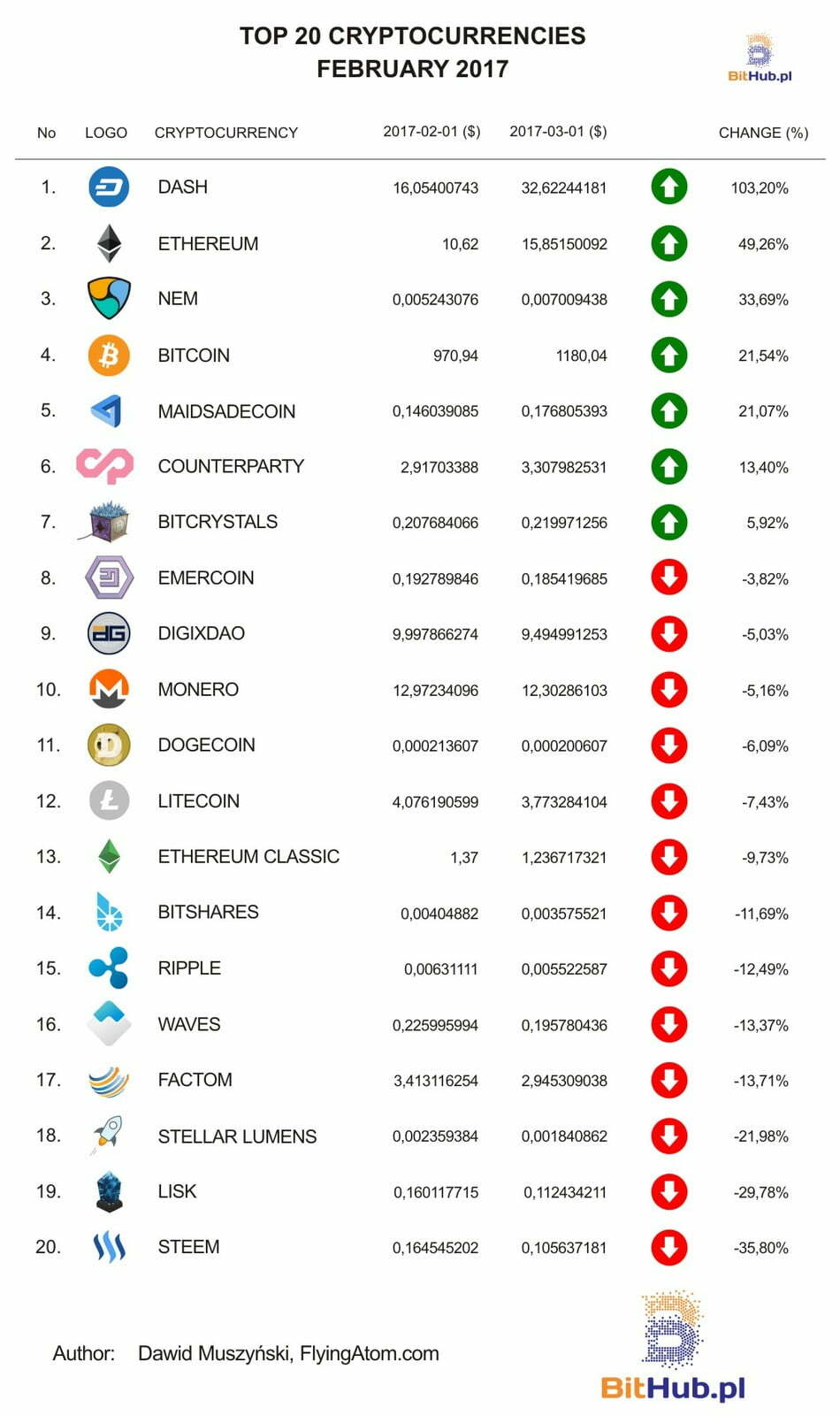 We asked two cryptocurrencies’ users for their diagnosis of the current state of the market and the future prospects. What are the reasons for such movements in the market in their opinions?

„The first days of Ferbruary resulted in a significant improvement in the cryptocurriencies’ market after the PBOC’s interventions on Chinese stock exchanges in January. Bitcoin quietly continued to relieve its decrease, beginning the month from levels slightly above 900 dollars until the next information from the Chinese market (withholding BTC’s pay backs for at least one month), which caused another wave of sell-off.

Rebound came fairly quickly, but since then the Chinese stock markets have ceased to confer a leading tone of price of BTC which can be seen looking at a drastic decrease of the volume on these exchanges for the benefit of other exchanges. Bitcoin ends the month with a price close to the value of 1200 dollars which indicates that the market completely abolished declines related to the situation in China. The moods are also better thanks to the expectant approval of SEC for Bitcoin’s fund called ETF, which would provide an easier access to this instrument for the stock market’s investors.

And what does the expert think of the behaviour of other, less popular currencies?

February also provided a lot of excitement and volatility for the participants of trading on the so-called „Altcoins”. A spectacular increase boasts DASH Coin, which began the month with a price slightly above 16 dollars and ended up with a value twice higher – more than 32 dollars and capitalization reaching more than 230 million dollars, which allowed DASH Coin, within a month, to become the third largest cryptocurrency on the market, leaving behind Monero, Litecoin and Ripple. Investors could also earn nearly 50 percent thanks to ETH, where a significant volume appeared in the last few days of the month which may indicate a very likely interesting movements on this cryptocurrency.”

It also draws attention to an interesting Polish topic, which drew the attention of investors last month:

„Also in February the Poloniex stock exchange added Polish project called Golem (GNT), which was a big surprise since until then the Golem was only listed on a very niche markets and adding it to the largest alternative cryptocurrencies stock exchange seemed very unlikely. After rapid growth associated with the addition to the stock exchange, the price of GNT began to decline and stabilized at the end of the month on the level about 20 percent lower compared to the price from the 1st of February. The month started well for the MaidSafeCoin, which after half of the month noted double-digit growth, but the price was completely abolished back to the levels before breaking. This month, however, was not favorable for holders of smaller „altos”, which in many cases have fallen by over ten percent or more. It is worth mentioning the items such as Steem, Factom or Lisk. PascalCoin also scored much larger declines abolishing almost completely its massive increase in the value at the beginning of the year. However, such a scenario for this cryptocurrency was expected especially in the short term.”

Adrian Gozdera agrees with him regarding the Chinese market:

„In February, Chinese stock markets once again has surprised us due to the dictation of PBOC, who ordered suspension of payments in the BTC and LTC while allowing payments in traditional currencies. Transfer of funds in cryptocurrencies is suspended until the implementation of broader protections against money laundering, illegal transfers and protection against pyramid schemes. Such actions should not take longer than one month due to the exchange statements. We are slowly approaching the end of this term (9th of March 2017). If the stock exchanges will resume the transfer of cryptocurrencies it will be a very positive news, however if the actions will extend or there will be no statements from the exchanges, it will raise new concerns as to whether they are solvent and can be translated into a further downward movement – quite impulsive. The decisions of PBOC very quickly transformed the the market of Bitcoin.”

He notes, however, that not only China had a large impact on the value of coins in February:

„Currently, the exchange rate goes under the dictation of stock exchange called Bitfinex. It is worth noticing the changes in terms of cumulative volume in different currencies. The Japanese yen is now struggling with the dollar and Chinese yuan more and more goes into oblivion. It is worth to register to see if we find the Japanese stock markets interesting – they begin to strike through the same policy that was applied on Chinese markets which means zero fee. An important occurrence for the Bitcoin market and for other cryptocurrencies will be the decision regarding the approval or rejection of the ETF. They have time until 11th of March 2017, which, I think, will be the most important event of the first quarter.

As for the Altcoin market: Ethereum returns to favour, its stock price strongly rebounded and the main movement initiated just before conferences that took places in Vienna and Paris. Large corporations enters into cooperations with the ETH developers. If the ETF will be rejected by the SEC this year could be the year of Ethereum rather than Bitcoin. Besides establishing corporate collaborations, ETH has many interesting implementations coming this year such as the transition to POS (Casper) and integrations with SNARKs etc. The second altcoin that strongly gained value is DASH Coin, here you can find the monthly report of the activities of developers and other members of DASH Coin team.

In February I would especially mark out those two currencies apart from Bitcoin. The implementation of Segwit on Litecoin turned out to be a big flop. The same thing happened to the other currencies, which wanted to break through thanks to the hype around Segwit. However the failure was caused by a small support. Those who composed themselves for the big jump in the prices of LTC miscalculated – the rate still falls. The rebound will probably come after the SEC’s decisions on the ETF’s case.”