March has been very good period for the whole market – almost every cryptocurrency gained in value. The leader of February – Dash – gained 124,91%, leader of January – Counterparty – gained in March 4,9%. However, it is Ripple which became the leader of March with profit reaching 265,63%. Second place belongs to Ethereum with result of 212,34%. And finally the third place has been taken by Lisk with 175,53% profit.

There were also some interesting price movements of cryptocurrencies which aren`t considered in the rank: Bitcoin Plus has risen in just two days, 27th and 28th of March, from 4$ up to 125$. However, at the end of month price had returned to its starting position of 4$. Also BitcoinDark gained in the same two days from 5$ to 29$, closing month with 8,5$ result. It seems that that price growth of these two cryptocurrencies was caused by the situation of Bitcoin and the potential threat of blockchain hard fork.

The main information in March, and simultaneously what the society held breath on, was conflict between Bitcoin Core & Bitcoin Unlimited. How emotional fight it was for all society could have been seen observing price, which decreased for a while to 888,21$ on Bitfinex. The last time we had such low price was on 26th January. There is a saying that when two quarrel, a third wins. In this case, there are even three winners: Dash, ETC and Monero. One of the main characteristics of cryptocurrency market is that when Bitcoin price falls, a big part of funds goes to other currencies instead of escaping to FIAT money.

One of the most interesting moments was 10th March. Just in 3 hours one could lose short and long position. Price firstly increased to 1340$ (Bitfinex) and shortly fell to 960$(Bitfinex). Cryptocurrency market is similar to NASDQ in late 90`, because today profits are as enormous, and as irrational, as they were at that time. 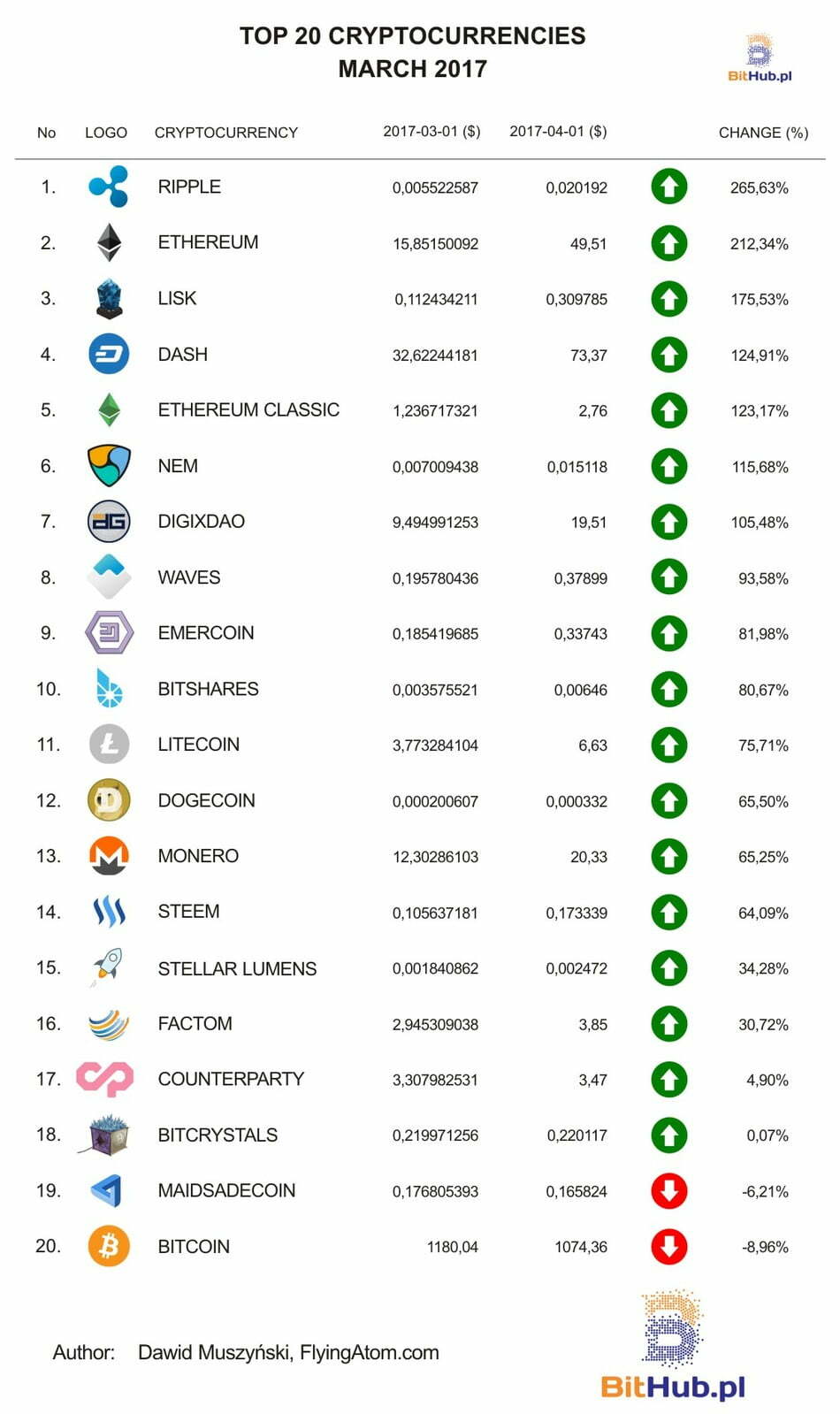 The monthly rank was commented by Dominik Gordel and Adrian Gozdera.

Undisputed surprises of March were altcoins. ETH, DASH, XRP have gained in value several times. Ethereum in the beginning of March was worth a dozen or so, whereas in the end it broke level of 50$. Market capitalization of ETH has reached 25% of Bitcoin capitalization, which is unprecedented situation. Currently, the altcoin market has possessed a lot of new fresh capital. It can be seen in value of many coins as well as in Bitcoin market capitalization share compared to altcoins as a whole. The number of this ratio decreased to about 68%, according to information from the ending of month. March has also been generous for keepers of Bitcoin`s younger brother Litecoin, which didn`t experience any important price increases for a long time. In the last days of March Litecoin`s price has risen over 100% up to nearly 8,5$.

However, not at once did the altcoins play the main role on the market. First decade of month was dominated by waiting for SEC`s decision about ETF on Bitcoin. It would be a huge step forward for the currency itself as well as for the whole market. Posituve decision would open way for huge money inflow directly to bitcoin via ETF and indirectly to altcoins. Despite having big hopes, SEC refused creating ETF in the last possible moment. Price had responded immediately, decreasing over 200$ and returning after several dozen hours to the previous levels.

A lot of uncertainty was also brought by announcements of cryptocurrency exchanges, regarding their opinion on the situation of potential Bitcoin hard fork (split of blockchain leading to extraction of Bitcoin Unlimited, which would increase size of block. Current 1MB limit is sometimes cause of delays in transactions. It also results in necessity of using high fees)

Emotions on the market are still sustained by both situation on altcoins, which are continuing their upward trend, and upcoming Bitcoin events, such as considering Bitcoin as a legal method of payment from 1st April in Japan or leaks of information on permission to resume Bitcoin withdrawals on Chinese exchanges. They were recently blocked by the PBoC to adjust legal regulations in China.

On 23rd March I wrote on my Fb profile that what happens on cryptocurrencies market can be officially called “The Second Great Cryptocurrencies Bubble”. Every important cryptocurrencies exchanges started to have increased volume. March was the month of altcoins, not Bitcoin. Roger Ver highly contributed to this with his concept of Bitcoin Unlimited, which of course I don`t support. When it comes to the development of Bitcoin I support Bitcoin Core 100%. I also claim that any smiliar actions may be harmful for the whole society, especially for Bitcoin. “Tulip mania” or “Dot-com bubble” are good comparisons to what is happening today on the cryptocurrency market. The best rate of return in this month was noted on Bittrex exchange: maximum ROI on Circuits of Value cryptocurrency could reach even 38000%. However, to me it was simply trick of dev team, or group that promoted this currency. They began from 1 satoshi on purpose, to raise awareness of market.

Why there had been such euphoria at all? Because of risk of Bitcoin hardfork the capital started to escape to altcoins. Firstly to the biggest and the most “safe” ones such us Ethereum, Dash, Factom, Monero and when these were too expensive pumps moved to projects with less capitalization on Poloniex exchange. When even those have gained in value growths on other altcoins have begun simultaneously on all exchanges. Even the littlest and least trustworthy.

It is worth mentioning, that the number of users on Poloniex surpassed 20.000. It is a 100$ increase compared to previous months. The growth has been so big, that Poloniex servers had troubles and the site was unavailable every few minutes. Also making new orders was difficult. From my perspective, the best period to multiple your capitalt has just begun . The main movement is over, yet the bubble ought to last for 1 or 2 months. We should witness something more than in December 2013, because of more people engaged in market as well as the capital moving from one altcoin to another.